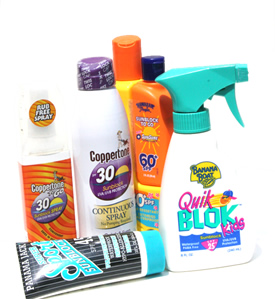 After thirty-three years of deliberation, the FDA tells consumers it’s OK to put toxic substances on their skin, and advises them to avoid natural sunlight!


The US Food and Drug Administration last week issued a final rule on the labeling of sunscreen products. The regulation says that sunscreen products which pass the FDA’s test for protection against both ultraviolent A (UVA) and ultraviolet B (UVB) rays may be labeled as “Broad Spectrum.” Both UVA and UVB radiation contribute to sunburn, skin cancer, and premature skin aging, but sunburn is primarily caused by UVB radiation. Only products that are labeled both as Broad Spectrum with SPF values of 15 or higher may state that they reduce the risk of skin cancer and early skin aging when used as directed.

However, as usual, the FDA is demonizing the sun and cautioning for limited sun exposure. Their press release states, “Most skin cancers are caused by sun exposure. FDA encourages consumers to protect themselves….Not only should consumers regularly apply and reapply sunscreens with Broad Spectrum and SPF 15 or higher, they should also limit sun exposure.”

But limiting your sun exposure can also limit your body’s vitamin D levels, since vitamin D is produced by your skin in response to exposure to natural sunlight. And as we have reported numerous times, vitamin D is essential to maintaining a strong immune system.

It is nearly impossible to get adequate amounts of vitamin D from your diet. Moreover, according to vitamin D expert Michael F. Holick, PhD, MD, professor of Medicine, Physiology, and Biophysics at Boston University School of Medicine, the further you live from the equator, the longer you need to be exposed to the sun (without sunscreen!) in order to generate vitamin D—and people with dark skin pigmentation who live far from the equator may need 20 to 30 times as much exposure to sunlight as fair-skinned people to generate the same amount of vitamin D. That’s why prostate cancer is epidemic among black men—it’s a simple but widespread sunlight deficiency.

Dr. Holick does advise caution so as not to get a sunburn, but says, “The population of the world has been brainwashed by the American Academy of Dermatology and the sunscreen industry for thirty years, with the unrelenting message that you should never be exposed to direct sunlight because it is going to cause serious skin cancer and death. People are really quite surprised by the new message that sensible sun exposure, in moderation, is very important for good health. We should appreciate the sun for its benefits, and not abuse it.”

But sunscreens make it easy to get too much sun, because they inhibit an enzyme in your skin that makes nitric acid. Nitric acid inflames the skin turning it red, so you know when to get out of the sun. By inhibiting this action you could actually stay out longer in the sun than you should.

FDA’s press release further stated that the agency is currently reexamining the safety information available for the active ingredients in most sunscreen products—though it “does not have any reason to believe these products are not safe for consumer use.” The agency also said that despite concerns that nanoparticles in sunscreen might be dangerous, “FDA testing has concluded that they do not penetrate the skin and are therefore safe.”

Given the highly absorptive properties of skin, we find FDA’s position to be the height of absurdity. In fact, during the media briefing, when FDA’s director of the Center for Drug Evaluation was asked whether the nanoparticles in spray on sunscreen was safe considering the added risk that they can be inhaled, she was was unable to answer the question. (That exchange is located at minute 37.51 in the webcast.)

The Environmental Working Group has criticized the FDA for still allowing toxic chemicals like retinyl palmitate and oxybenzone in sunscreen despite scientists’ concerns about their toxicity. Moreover, it has been demonstrably proven that the chemicals commonly used in sunscreens are indeed absorbed through the skin. As Dr. Tatiana Cannell of the Vitamin D Council puts it, “Sunscreens facilitate the skin’s absorption of pesticides. So if you want pesticides to be readily absorbed through your skin, circulate in your blood, go to your internal organs, and be excreted in your urine, wear sunscreens. Or you could take a swig of your Coppertone and chase it with a shot of Deepwoods Off.”