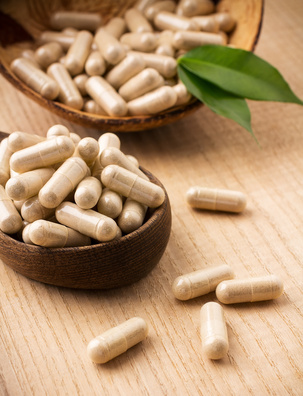 On the downside, the DV for calcium has been raised by 30%, despite the fact that excess calcium may promote arterial calcification. This is particularly true if it’s not taken with such key co-factors as vitamin K2 and vitamin D, as well as an appropriate, balancing amount of magnesium.
If the FDA wishes to reform its DVs, it should look at all the available relevant nutritional science, including how nutrients interact with cofactors, differences between synthetic and natural forms, and malabsorption issues and genetic polymorphisms that affect many Americans.
Changes to Vitamins’ Units of Measure
The FDA is also proposing changes to the units used for the amounts of vitamins A, D, and E in supplements.
These fat-soluble vitamins’ units of measure are changing from International Units (IU) to new, nutrient-specific measurements. Some of this is a good idea. The trouble with measuring vitamin D in IU is that each IU is unique to that vitamin. This can be confusing.
People naturally think that 10,000 IU of vitamin D is equivalent to 10,000 IU of vitamin A, but it isn’t. Moreover, the IU measurement scale of vitamin D happens to have used high numbers.
Since IU is an arbitrary scale, 5,000 IU could just as easily been expressed as 50 IU, even though it’s the same amount. 5,000 IU of vitamin D expressed in micrograms is 125 mcg, which does not sound as intimidating and is the amount many adults should be taking daily if they’re not exposed to sunlight at the right hours and right seasons. However, these smaller numbers may also make consumers believe they need less vitamin D than before, and add an extra layer of confusion for consumers attempting to understand valuable research done before the conversion.
If the FDA stopped there and just converted IU to mcg, it would all be well and good, but of course it plans to do much more with vitamins A and E, as discussed above. In addition, the change to mcg and mg is another indicator of the FDA’s wish to “harmonize” with Europe, where these measurements have been used for years.
We’ll be heavily criticizing the FDA in our submission to their proposed rule that will be submitted before the deadline closes on June 2. Even more importantly, we’ll be explaining why these labeling changes could be so damaging to the health of Americans, why the nutritional science the FDA has relied on is out-of-date, and how labeling can be improved to ensure citizens and health professionals are given all the information they need to make informed decisions about their health.
With this New Labeling Scheme, Who Wins?
Big Business. First, these DV changes could save the makers of fortified foods and Big Pharma’s bargain-basement supplements millions of dollars. For example, Kellogg can put less vitamin B12 in its Special K, but still say it contains 100% of your DV.
Fans of Codex and EU Harmonization. The changes in units of measurement for folate, niacin, and vitamin A harmonize FDA regulations with Codex’s guidelines on nutrition labeling. Additionally, the changes in DVs are, according to our colleagues at ANH-Europe, a “clear signal of a strong desire by the FDA to edge ever closer to the much more restrictive approach long associated with European regulation.”
Synthetic nutrients and medicines. The FDA’s nutrient conversions are a sneaky way of valuing synthetic nutrients over natural ones: by using synthetic nutrients as the “gold standard,” the FDA ignores the potential benefits of natural nutrients for many individuals—especially those unable or less able to convert synthetic nutrients into forms the body can use.
How These Changes Will Affect You
How much of a nutrient your body absorbs varies greatly depending on your individual biochemistry and genetics, availability of nutrient co-factors, the soil the food was grown on, how you cook or prepare it, and where you’re getting your nutrients. To use a one-size-fits-all approach is not only misleading—it could very well be dangerous.
According to Dr. Ron Hoffman, these labeling changes can potentially have “a negative health impact for the tens of millions of Americans who live on the cusp of nutritional insufficiency.” For consumers who are new to or not well-versed in supplementation, the new DVs will be woefully misleading. For example, consumers may think a supplement or food with a 100% DV of vitamin D is sufficient, when it clearly isn’t optimal for most.
It’s good that the FDA is attempting to revise outdated DVs. However, the disastrous ramifications of lowering vital nutrients’ DVs far outweigh any benefit derived from the insignificant increases in some nutrients.
This new supplement label guidance once again reveals that the FDA is not only hostile to supplements and biased in favor of drugs—it is also woefully lacking in an understanding of the science of supplements.
In this context, it is noteworthy that the FDA has now been put in charge of farms and farmers by the recent Food Safety Modernization Act. As we have also pointed out, this agency knows absolutely nothing about farming, and is already trying to push around small organic farmers and limit their use of natural farm manures.
What is really needed here is to split up the FDA into three agencies, one each for drugs, food, and supplements. That way an agency that is currently all about drugs and whose budget is supported by drug companies could begin to learn something about food and supplements.
Action Alert! The FDA’s labeling changes show a poor understanding of supplement science, will confuse consumers, and could endanger the long-term health of Americans, most of whom are teetering on the edge of one form of nutritional deficiency or another. Write to the FDA TODAY, and ask it to revise its new standards for DVs.

Have you taken action on the FDA’s folate ban?
If not, please do so today!

18 responses to “FDA Needs a Lesson in Supplement Science”