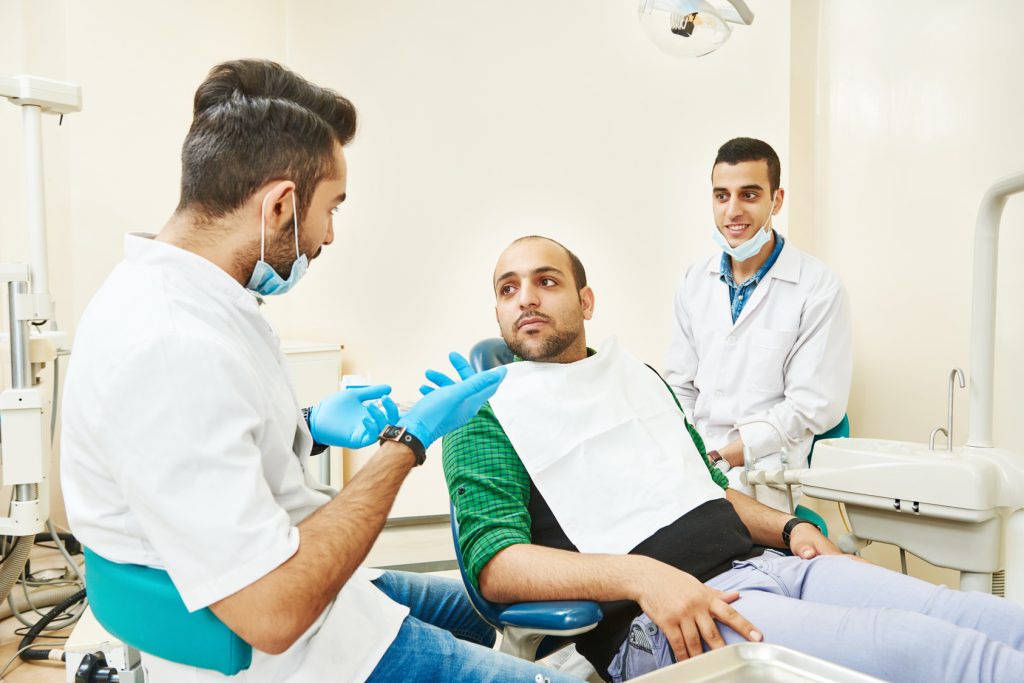 No kidding! All but one of many PubMed research abstracts that mention the relationship of erectile dysfunction (ED) to chronic periodontal disease actually suggest that periodontal disease is causative! So if things still aren’t working optimally despite all the things you’ve tried, it might be time to consider seeing your dentist, or maybe a periodontal specialist.
The periodontitis and ED connection is a relatively recent one. The first PubMed abstract on this topic is dated 2009. It concludes tentatively: “ED might be associated with chronic periodontal disease.”[i]
The next two publication abstracts listed are dated 2011. In the first, seventy young men (mean age 35.3 years) with ED were studied. The authors reported that those with severe ED were most likely to have chronic periodontitis.[ii] The second abstract concluded, “The function of penile erection is impaired by periodontitis.”[iii]
2012 brought (among many other things) another study that reported similar findings and new details. It noted that after “adjusting” for income, age, geographic location, hypertension, diabetes, hyperlipidaemia, coronary heart disease, obesity, and alcohol abuse/alcohol dependence syndrome, patients with ED were more likely to have been diagnosed with chronic periodontitis than control subjects who did not have ED.[iv]
The same research group published two research reports in 2013 suggesting that chronic periodontitis can at least contribute to ED. In a cohort of 120 men with both ED and moderate or severe chronic periodontal disease, half received periodontal treatment while the other half did not. The men who were treated had a significantly greater improvement in ED than the men who weren’t treated.[v]
The second report from the same group involved eighty men between ages 30 to 40—eighty with ED and eighty-two without this problem.[vi] In the “no ED” group, 23% had severe chronic periodontitis; in the “ED” group, 53% had severe chronic periodontitis.
In 2014 and 2015, PubMed brought us new chronic periodontitis­/ED research abstracts. The 2014 abstract[vii] was relatively cautious:
It may be concluded that chronic periodontitis and ED are associated with each other. However, further large scale studies…are warranted to explore the link between these two diseases.
Two more abstracts were published by PubMed in 2015, and (yes, already!) one in 2016. The first 2015 abstract[viii] reported that “patients with ED were more likely to have been diagnosed with chronic periodontal disease” (for the scientifically inclined, p < .001). “Moreover, the association was much stronger in the men aged less than thirty years and more than fifty-nine years” (again, for the scientifically inclined, p< 001).
This research abstract was the first to report effects of a specific treatment: “Dental extraction seems to attenuate damage to the penile endothelial beds caused by CPD-related inflammation and overcame the process of ED in the middle-aged and older populations.” In plain English, removing diseased teeth appears to decrease damage to the inside of blood vessels supplying blood to the penis in middle-aged and older men.
The second 2015 abstract[ix] reported a nationwide study of 1,025,340 men (no kidding!), of whom 321,103 were diagnosed with periodontitis. ED was reported to be “intimately related” with periodontitis, as was osteoporosis.
The authors of PubMed’s only 2016 abstract on this topic (so far) concluded:
The results of this systematic review revealed a positive association between CP and ED; however…better-controlled studies of socially homogeneous populations as well as pathophysiological studies are required to confirm the relationship between CP and ED and to explore the biological mechanisms involved.[x]
There are definitely many other causes and treatments for ED. If you’ve tried them all, and things still aren’t working optimally, it may be time to consider a visit to your dentist and/or periodontist! As a bonus, if periodontal disease is found and treated, many other health problems may also be improved.
An observation about ED­/periodontitis research: All ten abstracts reporting the link between ED and chronic periodontitis were written by research teams located outside these United States—in Israel, India, China, Taiwan, Turkey, and Korea. The only PubMed abstract from an American research group (at UCLA) effectively “dances around” the ED/chronic periodontitis link reported weakly or strongly by all the others.

One response to “For Erectile Dysfunction Treatment, See Your Dentist?”