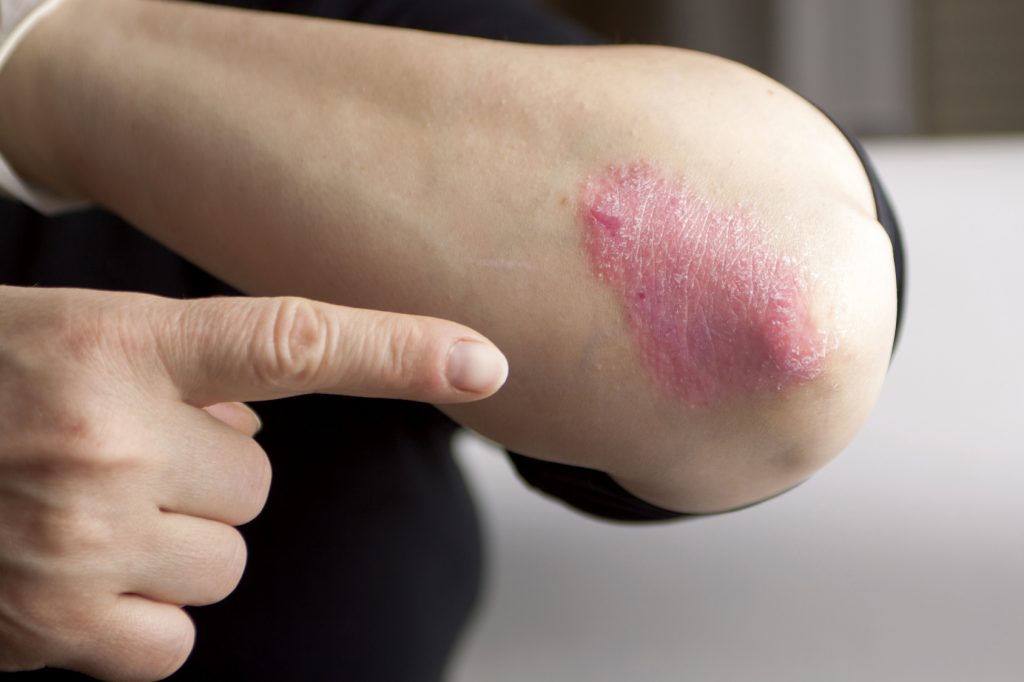 “Finding the cause” is the very necessary first step to a safe, effective solution to any health problem. Unfortunately, that first step is almost always ignored by the “standards of care” in much of today’s medicine. Those “standards” routinely recommend one or more of thousands of patent medicines (also known as “drugs” or “pharmaceuticals”) for nearly any health condition, even though it’s perfectly obvious that no health problem has ever been caused by a deficiency of patent medicines! Duh!
Psoriasis has traditionally been a “disease without a known cause.” As you likely know, psoriasis is characterized by plaques of red skin, most often covered with silver-colored scales (“plaque”), which are often itchy and painful, sometimes cracking and bleeding. According to WebMD,[i] “Although you can’t cure psoriasis, there are ways to ease its symptoms.”
Nature’s medicine can help those with psoriasis. Many natural treatments involve overall lifestyle changes which are thought to work by enabling the body to overcome whatever it is that’s really the cause of psoriasis. The most effective natural treatment I’ve seen is nickel dibromide, which has helped clear psoriasis in most—though not all—individuals who’ve tried it. Nickel dibromide (sold as Psorizide Ultra) was developed by Tulsa dermatologist Steven A. Smith, who published a 1997 article[ii] about it.
Although Dr. Smith wrote that bromide had been found to work against the overly rapid growth of skin cells involved in psoriasis, what caused skin cells to grow excessively rapidly was still not clear.
Three publications appear to have brought us closer to the actual cause. Here are the titles of two of these three publications:

These two publications are just single-case reports. However, it’s not unheard of for a single case to be the basis for a major shift in medical thinking and treatment. The “single case” discovery that H. pylori could cause peptic ulcers was the first step on the road to the 2005 Nobel Prize in Physiology for Australian internist Barry J. Marshall and his colleague J. Robin Warren.
The third publication implicating H. pylori as a causative factor in psoriasis[v] was based on examination and testing of three hundred individuals with psoriasis plaque. All of those—100%—diagnosed with psoriasis judged “moderate” or “severe” had positive tests for H. pylori; 37% of those with “mild” psoriasis were H. pylori positive. Treatment to eliminate the H. pylori was just as effective as conventional patent medicine treatment in improving or eliminating psoriasis.
While it’s still too soon to conclude that H. pylori is the root cause of psoriasis, it appears to be at least a major factor. If you or anyone you know has psoriasis, why not have testing done—perhaps the “H. pylori breath test”—to see if H. pylori is involved? If it is, please be aware that “standard of care” treatment for H. pylori can have some nasty adverse effects. Please make sure to check with a physician skilled and knowledgeable in natural medicine for effective but much safer natural treatment for H. pylori, which according to these three reports will likely improve or eliminate psoriasis!