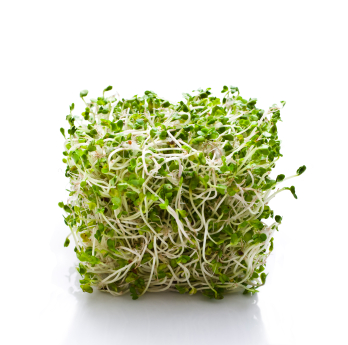 The USDA is ready to deregulate GE alfalfa, even though the EIS raises grave concerns. There’s still time to stop it—if we act quickly!

In April 2004, Monsanto and Forage Genetics International (FGI) requested non-regulated status of their GE alfalfa, genetically engineered to be resistant to herbicides containing glyphosate (including Monstanto’s Roundup®). The USDA granted their request. However, as we reported last June, the courts intervened and ordered the USDA to first conduct an Environmental Impact Statement, or EIS.
This EIS was completed on December 16, 2010. The report considers three alternatives for GE Alfalfa: regulation, partial deregulation, and no regulation, and strongly recommends the latter two alternatives.
There is now a short period for public comment and review—until January 24th—which means we have a small window of opportunity to take action. After this, the USDA will choose one of the three alternatives.
The USDA’s concluding recommendations are not surprising given that the USDA was ready to grant deregulated status before the court intervened. They show the USDA’s strong bias, and that there is no oversight in the EIS process.
Monsanto and FGI are against regulating GE alfalfa because, they claim, it would greatly diminish production. This would cut into the huge profits from producing the GE version of alfalfa—which in its original form has for decades been used by farmers as livestock feed because of its high protein and low fiber content. Alfalfa ranks fourth on the list of the most widely grown crops, and is ranked third among agricultural crops in terms of value.
Monsanto needs this genetically engineered alfalfa mainly because several of its products contain glyphosate, which would be toxic to non-GE plants.
The facts are shocking and irrefutable. All of the quoted passages below are from the USDA’s just-completed Environmental Impact Statement, available for viewing on the USDA website:

If the USDA deregulates GE alfalfa, it would set a dangerous precedent: the USDA is set to complete an Environmental Impact Statement on Roundup® Ready sugar beets. Since the issues involved are almost identical, the outcomes would likely be the same as well. Monsanto, the largest agribusiness company in the world, will rake in billions of dollars, at the expense of everyone’s health.

Remember, all public comment must be received by January 24 at the latest, so please take action now!