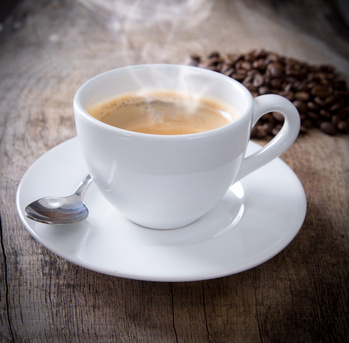 Does dairy negate your favorite brew’s health benefits?
A recent Fox News article informs us that adding butter to coffee, in order to boost energy and speed up weight loss, is the “latest trend” (actually, the Tibetans have been adding yak butter to their tea for generations).
The article adds that “There’s no scientific evidence to support the idea that adding butter to coffee…may help you lose weight.” But there’s more to this than meets the eye.
Ordinarily, we at ANH-USA are fans of butter, which is often maligned for specious reasons. It’s an excellent source of vitamin K2, which is hard to get from diet. The latest research reaffirms that saturated fats are not a risk to your heart.
The ANH-USA staff declined to test the “butter in coffee idea,” but we do think coffee with cream or milk tastes wonderful. Unfortunately, current research warns against adding any kind of dairy to coffee, tea, or chocolate.
Although the research on this is still evolving, it began with scientists wondering why residents of the United Kingdom, who drink tea, get so much heart disease. Since tea is protective against heart disease, why was this happening? The French, for example, drank far less tea, but had less heart disease. Why?
As it turns out, most British tea drinkers add milk, and study after study has found that dairy negates the health benefits of tea. This is because tea contains catechins, a form of flavonoids that are, in turn, a form of polyphenols, which are generally good for us. All mammalian dairy products contain the protein casein, which binds to and neutralizes catechins.
Coffee, like tea, can also have some positive health benefits. According to the Life Extension Foundation, drinking coffee regularly may help somewhat in warding off heart disease, cancer, diabetes, liver disease, and even Alzheimer’s. This is because coffee, like tea, contains polyphenols.
Since the tea discovery, researchers have been trying to learn if dairy has the same effect in coffee. After all, coffee differs from tea: it mostly boasts a different class of antioxidants, called cholorogenic acids (CQA), which contain only low levels of catechins. Unfortunately, some studies do suggest that adding dairy does interfere with the body’s absorption of CQA.
The takeaway? If you’re going to drink coffee or especially tea, it’s best not to add dairy or sugar.
Finally, and we are sorry to have to add this, the same seems to hold true about adding dairy to chocolate. In recent years, there has been concern that chocolate inhibits the absorption of the calcium in milk. It is theorized this could be because of the oxalates, or perhaps the sugar, in chocolate.
But there is also evidence that the milk interferes with the health-inducing flavonols, which Dr. Joseph Mercola pointed out as early as 2008. Dr Mercola also noted that:

Epicatechin, a compound found in unrefined cocoa, is another one of the powerhouse compounds that makes dark chocolate good for you, according to Norman Hollenberg, professor of medicine at Harvard Medical School, who has spent years studying the effects of routine cocoa drinking on the Kuna people of Panama….Unfortunately, epicatechin is removed from commercial cocoas because it tends to have a bitter taste….

However, epicatechin would presumably still be in raw cocoa beans, which are now commercially available. One of our staff members switched to raw chocolate nibs and discovered that the taste was wonderful with a little bit of Parmesan cheese. But, alas—cheese is, of course, dairy.
There may however be an answer from Dr. Mercola again:

Chocolate is…a perfect example of when less is more. Researchers found that eating a precise amount of chocolate—6.7 grams a day—will give you the best health benefits.

Those 6.7 grams of chocolate amount to one small square of chocolate two or three times a week. We’re talking about a very moderate amount here (if you’re using chocolate for health purposes).
So this may be the solution: eat a little bit of chocolate alone for health reasons—just don’t do it at the same time you indulge in milky hot cocoa for pleasure!
Speaking of pleasure, what could be more delightful than blueberries in cream? Blueberries are also a super food and, like many berries and colored fruit, another rich source of polyphenols.
Does that raise the same issue we have just raised for tea, coffee, or chocolate? Although there is some research suggesting that the same issue may exist, there really isn’t enough research to draw any firm conclusion yet. Meanwhile, for the puritanically minded, blueberries taste pretty sensational alone.
Before leaving this interesting subject, we can’t resist adding a story. Auberon Waugh reported in his memoirs that at the end of World War Two, the rationing authorities in England issued one banana per child to each household. When three bananas arrived at the Waugh household, the children had to witness their father, the famous novelist Evelyn Waugh, eat the bananas himself in a bowl smothered with sugar and cream.
Well, at least the cruel father might have missed some polyphenols by eating them that way!

59 responses to “How Do You Take Your Coffee or Tea: with Milk, Cream, or…Butter?!”