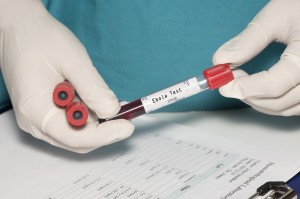 The current dearth of treatment options for Ebola is not from a lack of options, but from a zealous protection of current medical monopolies together with an overabundance of red tape.

In a related article, we discussed government hostility to natural remedies that are both cheap, effective, and more readily available. In this article, we’ll look at the FDA roadblocks to more conventional treatments.
The FDA is paid by drug companies and is generally friendly to them. Even so, getting a new drug or device approved is a torturous and insanely expensive process. The minimum cost these days is several hundred million dollars spent over many years. The average cost is in the billions.
Technology like Nanobiosym’s “iPhone-sized device,” which can be used to detect Ebola and other diseases in less than an hour, is being delayed by needless FDA red tape. The Dallas hospital that treated three patients with Ebola had a similar device, one that could detect Ebola with high degree of confidence within a few minutes, but were prevented from using it because of FDA regulations.
The FDA’s intransigence is deterring other companies (especially smaller ones) from even trying to create new technology. The timeline to develop new drugs and medical devices has increased 70% in the past decade.
The Ebola outbreak, soon to be exacerbated in North America by cold weather and its conflation with flu symptoms, has been overwhelming hospitals’ ability to quarantine all suspected infections, and the situation will only intensify in the near future. Being able to actually use these new and promising Ebola treatments—which have already been shown to be safe after initial testing in real world conditions—instead of waiting endlessly for approval via the FDA’s outdated double-RCT model, is essential. Patients would then be followed closely to see how well the new products are working in the longer term.
The Life Extension Foundation has detailed the systemic problems of FDA’s approval process, which prevents patient access to other effective treatments for other serious illness as well.
Other promising tools for preventing the spread of Ebola include a robot that blasts ultraviolet light (25,000 times more powerful than sunlight) to kill the virus. The light touches and cleans all surfaces, including under the bed and between the folds of curtains, rendering rooms 99.9% sterile, versus 85% using conventional methods. The technology uses xenon light, which is more environmentally friendly, instead of bulbs with mercury, which are toxic. Investing in such machines is urgently needed, given the chronic problem hospitals have with infections: the CDC estimates that 1.7 million people contract hospital infections each year—and that’s not including any infections that might have hospitalized them in the first place!
It’s important to note that the FDA’s profoundly broken approval process does not even guarantee safe drugs. In 2008 alone, the government recorded 526,527 adverse events from FDA-approved drugs and “therapeutic biologics,” of which 275,421 “had serious outcomes.” For the sake of comparison, there were only 672 serious adverse events from nutritional supplements that year—even though supplements were taken by about 152 million Americans.
As broken as the FDA is at the moment, it is little different over at the National Institutes of Health, where most of the Ebola drug trials should be happening. NIH director Francis Collins cites budget cuts, but NIH funding for infectious diseases has in fact doubled since 2001, with little to show for it.
Be sure to read our other article on Ebola in the current issue of this newsletter, where we discuss groundbreaking natural treatments for the virus.