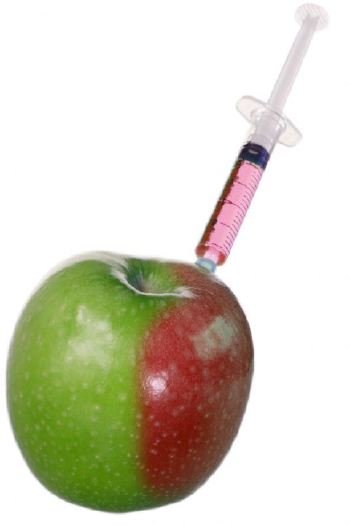 Apples genetically engineered not to turn brown when sliced or bruised. And new, unnatural proteins are being created in the process. Action Alert!

The “Arctic Apple,” engineered by the British Columbia–based Okanagan Specialty Fruits, thinks the non-browning apples could improve industry sales the way “baby carrots” did for carrot sales. Of course, as most people now realize, “baby carrots” are not young, tender carrots at all, but are simply specially shaped slices of peeled carrots, invented as a use for carrots that are too twisted or knobbly for sale as full-size carrots.
In other words, the GMO apples are designed to fool the public into thinking they’re something they’re not.
“Is it a rotten apple that looks fresh?” said Lucy Sharratt, coordinator of the Canadian Biotechnology Action Network, a coalition fighting GMOs. The fruit company had submitted an application to the Canadian Food Inspection Agency, but chose not to make any raw data available to the public during the comment period, supplying only two pages of bullet points talking about the data. The Canadian comment period closed on July 3.
Sharratt also said the genetic engineering was “designed to turn the apple into an industrialized product” that could be sold in plastic bags instead of as whole fresh fruit. She noted that a consumer poll commissioned by BC and Quebec apple grower associations found that 69% of Canadians do not want the GE apple.
The apples, which we’ll likely see in the Golden Delicious and Granny Smith varieties first, contain a synthetic gene that sharply reduces production of polyphenol oxidase, an enzyme responsible for the browning.
Some growers, particularly organic ones, worry the anti-browning gene will spread to their apples. While apple pollen does not usually drift very far on the breeze, it can be carried by bees, and cross-pollination would occur without any way to control it.
Here’s what’s most troubling: while only one changed gene will keep the apples from browning, it is likely that other genes have also been changed in the process of creating a GMO. In fact, Kirk Azevedo, a Monsanto market manager working on genetically engineered cotton (who has since left the company) was told by one of Monsanto’s PhD researchers that there are “other proteins that are being produced, not just the one we want, a byproduct of the genetic engineering process.”
When Azevedo, who had also been studying protein diseases and knew that such proteins could be toxic, said they needed to destroy the seeds from the GE crop so they weren’t fed to cattle, the other researcher said that Monsanto isn’t going to stop doing what it’s been doing everywhere else.
Azevedo later said, “I saw what was really the fraud associated with genetic engineering. My impression, and I think most people’s impression with genetically engineered foods and crops and other things, is that it’s just like putting one gene in there and that one gene is expressed….But in reality, the process of genetic engineering changes the cell in such a way that it’s unknown what the effects are going to be.”
That “unknown” factor is most troubling. No testing has been done to assure the apples’ safety in the long-term, and we know that scientists are seeing birth defects, high infant mortality rates, and sterility in hamsters, rats, and livestock fed genetically engineered soy and corn, and some hamster pups even started growing hair on the inside of their mouths.
The USDA has opened a 60-day public comment period on Okanagan’s application for approval of the GE apple trees. Action Alert! Please send your message to USDA about the dangers of GMO foods, and tell them to keep apples natural!