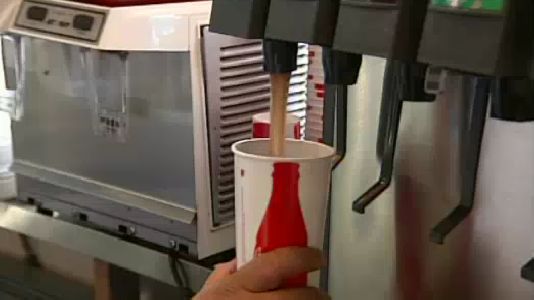 On June 12, in an attempt to combat the obesity epidemic, New York City Mayor Michael Bloomberg will ask the Board of Health to ban the sale of sugary drinks larger than 16 ounces by movie theaters, restaurants, mobile food carts, and delis, though not grocery stores or convenience stores—so 7-Eleven’s 44-ounce Super Big Gulp is safe.
The proposal would exempt diet drinks—not to mention fruit-based drinks, dairy-based drinks, and alcoholic beverages, no matter how many calories they contain. There will then be a three-month comment period before the Board votes on the proposal. If the Board agrees, the ban could be in effect as soon as next March.
Most soft drinks are sweetened with high-fructose corn syrup. HFCS is a corn syrup that has undergone enzymatic processing to convert some of its glucose into fructose to produce a desired level of sweetness. HFCS may suppress the chemicals that signal when you should feel full. For this reason and others relating to the metabolism of sugar into fat, it has been linked to obesity. In addition, because of its processing, some brands of HFCS may contain mercury, a known neurotoxin.
We have ourselves pointed all this out in the past. But it is not the whole story. Note that the mayor has exempted so-called diet drinks featuring artificial sweeteners. The mayor seems to like them and his proposal will undoubtedly push more people into choosing them. There is evidence that these drinks are extremely dangerous, potentially more so than the drinks they would replace.
As we reported last year:

Mayor Bloomberg needs to seriously rethink his proposed ban; it demonstrates a complete ignorance of science on his part. When government tries to force people to behave a certain way on pain of fines or worse, there is always the risk of unintended consequences, as there is here, quite apart from the question of whether government should be telling people what to eat in the first place.
What even the most informed scientists know about food (and medical treatments) is continually changing. Beliefs should compete in the market of public opinion and consumer purchases. Over time people will become better informed and with luck better choices will be made. If government officials jump in with their heavy-handed punishments, there is too much risk that they will get the science wrong, as the mayor has, or they will freeze today’s science in law even though that science should continually evolve.
The mayor, in his usual “father-knows-best” style, says that opposition to his ban is “ridiculous.” But it isn’t. There are many reasons to oppose it, including scientific as well as civil libertarian ones.
Action Alert! Please write to Mayor Bloomberg and the New York Board of Health (even if you don’t live in New York City), and point out some of the science suggesting that diet sodas may be potentially even more dangerous than sugary ones! Take action now!

44 responses to “You Think HFCS Drinks Are Dangerous, Mr. Mayor? Why Do You Think Diet Drinks Are Better?”