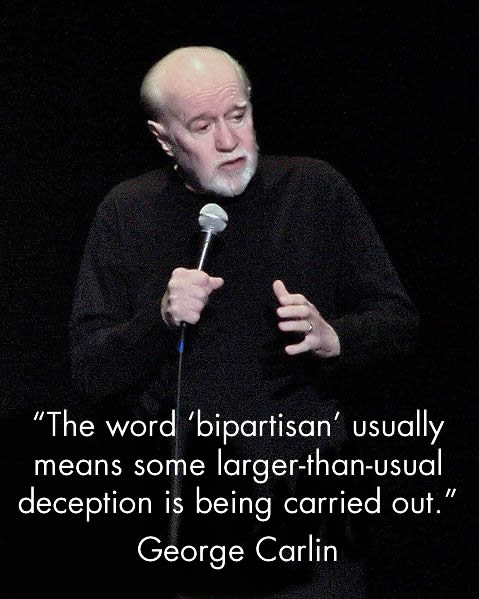 We’re still talking with our allies on the Hill to get more improvements, but we need your help to make sure your rights are protected. Action Alert!

We’ve been telling you about the Senate bill that places bioavailable estriol, so important to millions of women, and other important natural compounded medications in grave peril. Now the House of Representatives has released its own compounding bill, HR 3089.

It is likely that the Senate version will pass very soon, and the House bill won’t be far behind. We have heard from our allies on the Hill that there is very strong bipartisan support to pass a compounding bill this session. But you know what George Carlin said about the word “bipartisan,” don’t you?

The House bill is much better than the Senate bill, which is all about giving freebies to Big Pharma under the pretense of making compounding safer. Very importantly, the House bill does not endanger estriol. We are very grateful to our congressional ally, Congressman Morgan Griffith (R-VA) for that. However, there are still some areas of major concern in the House bill, and we are working on Capitol Hill to address them:


Meanwhile, the Senate version of the bill remains the biggest problem, for the following reasons:


Let’s keep in mind that the FDA-approved drugs whose monopoly the FDA is trying to safeguard are not bioidentical and have been proven by extensive medical research to be very dangerous for women, specifically representing heart and cancer risks. The FDA is not a department of Big Pharma. And this kind of behavior is really reprehensible when the risks of the FDA approved drugs are at this point settled science and beyond dispute.

We have already been successful in making some very positive changes to the Senate bill because of the thousands of messages from our readers and grassroots activists like you, together with our meetings with Capitol Hill decision-makers. We got lawmakers to create a standard for the phrase “difficult to compound” so that FDA is forced to meet a burden of proof before they limit consumer access to medications based on this provision. Specifically, we included language that exists in current law: compounding must be “reasonably likely to lead to an adverse effect on the safety or effectiveness of that drug or category of drugs, taking into account the risks and benefits to patients.” We also made sure that the provision that compounders needed to perform random controlled trials in order to meet a “safety and efficacy” standard was removed. This was a real “poison pill” in that no one could afford to pay for these trials. Such a requirement would have inevitably led to the disappearance of many compounded medications, as the FDA (and the drug industry) know well. We were also able to remove the requirement that doctors must substantiate the need for a compounded prescription. This was another gross federal interference in the practice of medicine, which is supposed to be regulated by the states.

As you can see, there is still a lot of work to be done on this bill on both sides of Capitol Hill. Action Alert! We need to flood both the House and the Senate with emails, highlighting our various concerns over each of the bills. Please send your messages to Congress today, even if you sent a message about the Senate version previously!

Action Alert to the House:

Action Alert to the Senate:

19 responses to “New Compounding Bill in the House—and More Work to be Done!”