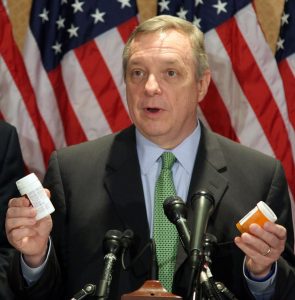 You won’t believe this, but Senator Durbin has actually reintroduced his disastrous anti-supplement bill! Urgent Action Alert!
On August 1, just as Congress is preparing to recess until the second week in September, Sen. Dick Durbin (D-IL) reintroduced legislation (S.1424) that would deal a deadly blow to nutritional supplements. The the language of Sen. Durbin’s new bill is identical to that of his previous bill, the Dietary Supplement Labeling Act, which ANH-USA and grassroots activists nationwide successfully fought in the past.
Sen. Durbin has said his bill is designed to stop “mislabeling products and making health claims that have no scientific basis” and “marketing supplements with impure or incorrectly identified ingredients.” If that’s the case, the senator should be pleased to know that each of those things is already against the law! In fact, almost all of the bill’s provisions are already covered by existing law, and the few that aren’t covered are so vague that they could mean whatever the FDA wants them to mean.
This bill requires that the FDA, together with the Institute of Medicine (IOM), compile a list of dietary ingredients (supplements) that might lead to adverse events, or are otherwise deemed risky in some way—based on completely arbitrary or nonexistent standards. Given the FDA’s profound bias against supplements, and the skewed, anti-science recommendations of the IOM’s vitamin D report, these are hardly trustworthy sources of guidance!
Creating arbitrary lists of “bad” supplements or “bad” doses, especially with no scientific evidence whatsoever, is a dangerously slippery slope. This bill will give the FDA major new powers to curtail supplement sales, and neither the FDA nor the IOM will be subject to any clear standards. They can just make it all up as they go along! Even worse, once an ingredient or supplement is on the list, there is no clear process to challenge the FDA and IOM determination, not even if new or contradictory evidence comes to light.
This bill is a naked FDA power grab—an attempt to move us one step closer to a full FDA pre-approval system for supplements. That, of course, would just make supplements insanely expensive, like drugs—if you could get them at all. Since foods and supplements already occurring in nature are not generally patentable, producers faced with immense FDA approval costs (the average new drug costs $1 billion to get approved), most health foods and supplements would no longer be marketed at all.
URGENT! Please write to your senators immediately and tell them to stop Sen. Durbin’s frontal attack on your right to use supplements dead in its tracks! We don’t need this new legislation—all we need is for existing laws to be fully enforced. We need our access to nutritional supplements to be protected. Please write your senators today!