Genetic engineering outcomes are inherently unpredictable. Credible scientists have proven that genetically altered DNA can be horizontally transmitted—say, from your food to your gut bacteria.
And while millions of people worry about what scientists are doing with GMOs in laboratories, a new angle has emerged: do-it-yourself “scientists” bioengineering in their basement. They’re using a kit that can be purchased online for less than $200. It’s called CRISPER (Clustered Regularly Interspersed Short Palindromic Repeat), and it exploits an ancient doorway where DNA defends itself against foreign DNA. This stretch of DNA is like a DNA immune system—it destroys potential DNA invaders. The kit circumvents the ancient firewall, allowing foreign DNA to be inserted into the genome. Anybody who wants to can do their own genetic experiments on bacteria and yeast. No lab, no license, no education, no government oversight. 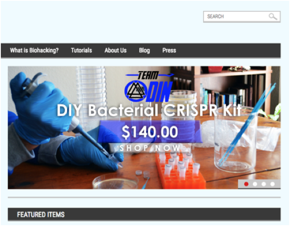 Scientists don’t know how or why CRISPR works. Most don’t care. “People just don’t have the time to characterize some of the very basic parameters of the system,” according to Bo Huang, a biophysicist at the University of California, San Francisco. “There is a mentality that as long as it works, we don’t have to understand how or why it works.” And while the safety of the gene-altering kit isn’t remotely proven, its potential for major catastrophe is. Researchers who used CRISPR to create a breathable lung cancer virus for mice admit that a tweak or two could turn it into a breathable lung-cancer virus for humans.
At least twenty separate published studies predicted that CRISPR could be used to “repair” bad genes in humans. So when scientists geared up to fix the gene that causes a disease known as β-thalassemia in a human embryo, things looked good to go. Things didn’t go as predicted, however. CRISPR hit the right gene only 52% of the time. Of the twenty-eight correct hits, CRISPR repaired the gene only four times. Seven of the hits repaired the bad gene back to its original mutated state, and CRISPR caused multiple new mutations. Of their research, the scientists said, “Further investigation of the molecular mechanisms of CRISPR/Cas9-mediated gene editing in human model is sorely needed.”
Is genetic modification more predictable in plants? Five years after he helped genetically modify “golden rice,” scientist Peter Beyer asked, “Why is golden rice golden (yellow) instead of red?” He was asking because he’d helped engineer the rice to make lycopene, a red carotenoid, and it was making beta-carotene, a yellow carotenoid. (See below for more on golden rice’s failed promises.)
One of the problems with GM is that altering a gene has global effects. When genes are altered in one area, other areas are affected. Supporters of GM explain it away by saying that genes naturally “jump around.” Geneticists would be very surprised to hear this since they see genes in humans that haven’t changed in hundreds of millions of years. Humans possess genes for hormones that were in worms 500 million years ago. They have not “jumped”.
The number of genes for nuclear receptor proteins in humans, mice, rats, dolphins, chickens, ducks, turtles, and frogs are virtually identical. The difference between the core genes of one person and the next is virtually undetectable (0.1% difference at most). Genetic variation occurs in the code between genes and in single nucleotides within genes. But genes themselves do not jump around.

One thought on “Outcomes of Genetic Engineering Are Not Predictable”