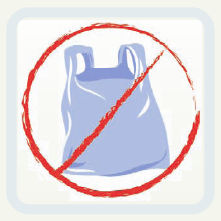 Score one for environmentally conscious businesses. Keep up the pressure on your state legislatures—Take Action!


Remember the ludicrous lawsuit we told you about recently against ecological leader ChicoBag? The plaintiffs—Hilex Poly Company, Superbag Operating, and Advance Polybag, who make disposable single-use plastic bags—have dropped the case, most likely in response to public pressure from citizens like you!

Part of the lawsuit alleged that ChicoBag was spreading false information about plastic bags. When ChicoBag challenged the plastic bag companies to prove their allegations by publishing the true recycling rate of plastic bags, Superbag and Advance Polybag dropped out of the case. Hilex Poly, now fighting alone (one might say they were left “holding the bag”), quickly settled the case against ChicoBag.

The settlement brought some necessary changes. The plastic bag industry had been saying, “Bags don’t litter, people do.” But as part of the settlement, Hilex acknowledged that single-use bags can indeed become wind-blown litter even if they are properly disposed, and the company agreed to address the issue on its website and print a message on its bags telling users to tie the bag in a knot after using them to prevent windblown litter.

A huge thank you goes out to our member activists for writing their legislators in support of plastic bag bills. Please continue writing and highlighting this important issue with our Action Alert—the tide of public opinion is definitely against the use of disposable plastic bags!

25 responses to “Plastic Bag Victory—Keep the Pressure On!”