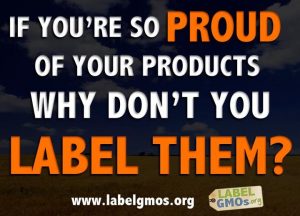 And to paraphrase a famous Californian, “We’ll be back!” Sign the pledge.

The opposition spent $45 million and narrowly defeated this citizen-driven initiative. If we are patient, we can still eventually win.
California’s Label GMO proposition failed at the polls last week, the vote is currently 47.2% to 52.1%, ballots are still be counted due to the of millions of mail-in-votes California processes every election. Even though we lost to an overwhelmingly well-funded opposition led by Monsanto (they massively outspent Label GMO), the vote showed tremendous grassroots support for GMO labeling—with four million Californians voting in favor of the proposal.
Here’s an irony for you: the Big Food industry claimed that the proposition would increase food costs. This was proved to be untrue, yet they were willing to spend $45 million to keep foods from being labeled. Clearly Monsanto et al. are terrified of the American public actually learning what’s in the food they buy every day. They must be really proud of their product!
Even better, this campaign made genetically engineered foods a topic of state and national conversation, despite the opposition’s fear-based propaganda and personal attacks on integrative physicians.
A luta continua, as the saying goes—the struggle will continue. We’ll continue to build on the momentum, and roll up our sleeves to get the proposition back on the ballot when we have another chance in 2014.
But until then, there’s something we all can do: continue to boycott the companies that fought against your right to have your food properly labeled! In addition to Monsanto, DuPont, and Dow, you’re familiar with the big consumer food names:

But you may be shocked at some of the brands they own—brands you’d never think would be associated with the pro-GMO camp. Don’t let these companies get away with trying to eliminate your freedom of choice! See our full list of companies and brands that donated to defeat Prop 37, and please sign our pledge that you’ll keep up the boycott!

Leave a Reply to CAROL A. RUSSELL Cancel reply