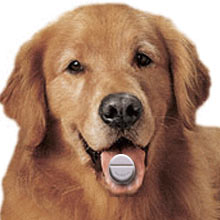 Now Fido can have the same violent and psychotic breaks from SSRIs as humans. Please support our new Citizen Petition to the FDA!

The FDA has approved a reformulated version of the much-prescribed SSRI (selective serotonin reuptake inhibitor) Prozac, but this one is just for dogs. Reconcile was created to treat canine separation anxiety. It is a once-daily, chewable, dog-treat-flavored drug that is supposed to be used “in conjunction with a behavior modification plan.”
Reconcile’s full product label, which by law includes complete safety information, does not contain the black box warning that is mandatory on the drug for humans. Of course, that black box notice merely warns of increased risk of suicidal thinking and behavior in children, adolescents, and young adults. The label doesn’t make any mention of the documented connection between antidepressants and violence towards others, nor the drug’s propensity for causing mania, or increased feelings of hostility or anxiety in humans. Withdrawal from SSRIs can be similarly dangerous, ranging from nausea to suicidal ideations.

Given the tremendous risk of humans having a psychotic break when they take Prozac, what are the risks associated with animal use? No one knows—certainly not the FDA, which approved it. What if the dogs turn inexplicably violent? What if the breed is naturally aggressive (which would include the very breeds most prone to canine separation disorder)—will the drug heighten the aggression?


A recent high-profile article in the New York Review of Books (links: part 1 and part 2) discusses the symbiotic relationship between the pharmaceutical industry and psychiatrists to push antidepressants. Some of the revelations:


Antidepressants, whether for humans or for pets, is a massive industry. According to the CDC, antidepressants are now among the top three classes of human medications prescribed in the US.

In fact, antidepressants are being increasingly prescribed for people who have never been diagnosed with any actual psychiatric disorder, according to a new study published in the journal Health Affairs. Nearly three-quarters of prescriptions written for antidepressants in 2007 came from non-psychiatrists, up from 60 percent a decade earlier. The percentage of patients prescribed antidepressants without having been formally diagnosed with a mental health condition more than doubled during that period—up from 2.5 to more than 6 percent of visits to non-psychiatrist providers.

Sometimes the antidepressant is just one ingredient in a combination pill; the patient may never even know what he or she is getting. An example of this, which we recently criticized, was the proposed diet pill Contrave—a drug the FDA has at least temporarily rejected. How many people wanting to lose weight would know that they are getting onto a highly addictive antidepressant?

Pushing drugs on animals is driven by the same profit incentive that we see with humans. Americans will spend over $50.8 billion on pet products and services this year. It is the fastest growing retail segment in our economy. As the New York Times noted:

Surveys by the American Pet Products Manufacturers Association found that 77 percent of dog owners and 52 percent of cat owners gave their animals some sort of medication in 2006, both up at least 25 percentage points from 2004. Sales of drugs for pets recently surpassed those for farm animals. Eli Lilly created its “companion animal” division at the beginning of 2007 and over the next three years hopes to release several other drugs. Pfizer, whose companion animal revenues have grown 57 percent since 2003 to nearly $1 billion, hopes to develop medications for pain, cancer and behavioral issues.


The FDA has approved other drugs for dogs as well: Slentrol is the country’s first canine anti-obesity medication, and Anipryl treats cognitive dysfunction so that absentminded pets can remember the location of the supper bowl or doggie door.

There is also the burgeoning market of chemotherapy for dogs. But in our desperation to save our beloved companion animals’ lives, we may well forget how incredibly dangerous chemotherapy can be for humans; it often does more harm than good. It is surely no less toxic to animals.

When Medicare reduced reimbursements for oncologists in 2003, some physicians started giving their patients more expensive chemotherapy drugs. Keep in mind also that oncologists are not only permitted to prescribe specific chemotherapy drugs to their patients; they may then sell those same drugs to them—at a huge profit. Other doctors may not sell drugs, but oncologists can. Will chemo for dogs become a huge new profit center too—without making the dogs live longer or better in any way?
As Shirley Moore, director of Save a Dog of Sudbury, Massachusetts, told us, “I’m not surprised that the pet-loving population is not warned about Prozac. I just took a call from a woman last week whose dog was biting the kids and of course, the dog was on Prozac and she was told nothing about the side effects. She wanted to turn the dog over to the humane society, but I had to tell her that we can’t take dogs who are on Prozac because you can’t get them off of it. It’s designed to keep you coming back for more, just like all the other pharmaceuticals foisted on the pet owners.”
There is disagreement and dissent within the veterinary community over a number of such medications. The American Veterinary Medical Association’s annual convention in New Orleans, attended by more than 10,000 of the country’s leading vets, saw a heated debate about the doggie antidepressants Clomicalm and Reconcile, and Slentrol, the world’s first canine anti-obesity pill.
The veterinarian at Eli Lilly, the company that makes Reconcile, says, “Behavior modification by itself works. There’s not any question about that. But if you use behavior modification in conjunction with Reconcile, it works quicker and it works better.” Yet Eli Lilly’s own study showed that short-term side effects include lethargy, depression, and loss of appetite. Is that an example of “working better”?
It is easy to start antidepressant medications. But as with any highly addictive substance, it can be difficult to impossible to get off them.

Please write to the US Food and Drug Administration today in support of our Citizen Petition to put Black Box Warnings on all SSRI drugs—whether for humans or for dogs—that warn of the link between antidepressants and sudden violent behavior.

53 thoughts on “Prozac for Pets”