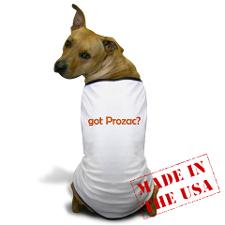 
Shirley Moore, director of Save a Dog of Sudbury, Massachusetts, writes:

I’m not surprised that the pet-loving population is not warned about Prozac. I just took a call from a woman last week whose dog was biting the kids and of course, the dog was on Prozac and she was told nothing about the side effects. She wanted to turn the dog over to the humane society, but I had to tell her that we can’t take dogs who are on Prozac because you can’t get them off of it. It’s designed to keep you coming back for more, just like all the other pharmaceuticals foisted on the pet owners.

There is disagreement and dissent within the veterinary community over a number of such medications. The American Veterinary Medical Association’s annual convention in New Orleans, attended by more than 10,000 of the country’s leading vets, saw a heated debate about the doggie antidepressants Clomicalm and Reconcile, and Slentrol, the world’s first canine anti-obesity pill.

The veterinarian at Eli Lilly, the company that makes Reconcile, says, “Behavior modification by itself works. There’s not any question about that. But if you use behavior modification in conjunction with Reconcile, it works quicker and it works better.” Yet Eli Lilly’s own study showed that short-term side effects include lethargy, depression, and loss of appetite. Is that an example of “working better”?

As we pointed out in our article and Shirley Moore underlined, it is easy to start antidepressant medications. But as with any highly addictive substance, it can be difficult to impossible to get off them.