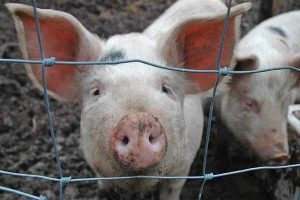 This week a judge told FDA to reverse course regarding antibiotic overuse in livestock and protect the effectiveness of the medicine for humans. Action Alert!

For the past 35 years the FDA has supposedly been reviewing the routine use of antibiotics in animal feed when in fact the agency was simply sitting on its hands. Then, last December, the agency caved to pressure and quietly withdrew any attempt to require the removal of antibiotics from animal feed.
The public was outraged, and a coalition of nonprofit organizations sued FDA to force the agency to reconsider and withdraw approval for most non-therapeutic uses of penicillin and tetracycline in animal feed, unless drug makers can prove in public hearings that the drugs do not harm human health when used this way. The lawsuit was filed by the Natural Resources Defense Council (NRDC), the Center for Science in the Public Interest, Food Animals Concerns Trust, Public Citizen, and the Union of Concerned Scientists.
On March 23, a federal court ruled in their favor!
Back in 1977, FDA concluded that feeding animals low doses of certain antibiotics used in human medicine, namely, penicillin and tetracyclines, could promote antibiotic-resistant bacteria capable of infecting people. Despite this conclusion—and in direct violation of laws requiring that the agency move on its findings—FDA failed to take action for the next 35 years.
“For over 35 years, FDA has sat idly on the sidelines,” said Avinash Kar, a health attorney for the NRDC. “In that time, the overuse of antibiotics in healthy animals has skyrocketed—contributing to the rise of antibiotic-resistant bacteria that endanger human health….These drugs are intended to cure disease, not fatten pigs and chickens.”
As we reported in January, the so-called “preventive” use of antibiotics in livestock is routine and widespread—80% of all antibiotics sold in US go into farm animal feed. Factory farms use them to ward off illness in animals that are kept in overcrowded, filthy living conditions, which are a perfect environment for the spread of illness. These antibiotics are also used to promote increased growth in animals.
However, antibiotics given to animals are transferred to humans through direct contact, environmental exposure, and the consumption and handling of contaminated meat and poultry products—making humans vulnerable to antibiotic-resistant superbugs, which are now a global problem. Moreover, a study found that up to half of US meat was contaminated with antibiotic-resistant staph.
If FDA truly wanted to focus on food safety, it would address the filthy, toxic factory farm conditions rather than allowing healthy animals to be fed antibiotics preemptively.
Big Farma stridently opposes legislative and regulatory attempts to curtail antibiotic usage, making the absurd claim that the science is still inconclusive. So to avoid antagonizing Big Pharma and Big Farma on antibiotics, FDA’s has been issuing voluntary compliance standards. For example, in 2010 FDA issued a draft guidance proposing that farmers voluntarily stop the use of low-dose antibiotics in farms animals.
Now, as a result of the lawsuit, FDA is forced to take action on its own safety findings by withdrawing approval for most non-therapeutic uses of penicillin and tetracyclines in animal feed, unless the industry can prove in public hearings that those drug uses do not affect human health. The judge also ruled that FDA must warn drug makers that the government may soon ban the agricultural use of antibiotics for animals that are not sick.
FDA is expected in the next few days to issue draft rules that ask drug manufacturers to voluntarily end the use of antibiotics in animals without the oversight of a veterinarian. But this is not good enough! Please write to FDA today, and tell the agency to stop creating ineffective “window dressing” standards, and finally complete the process they started 35 years ago. Tell them to withdraw approval of non-therapeutic uses of antibiotics in animal feed immediately, as ordered by the court. Take action immediately!

11 responses to “Superbug Lawsuit: Court Orders FDA to Do Its Job—After a 35-Year Delay!”