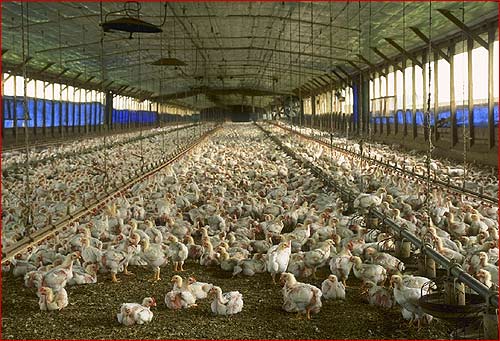 (Updated June 16)
The chickens you buy at the grocery store are given feed with arsenic added to make them gain weight faster. Yes, arsenic—the deadly poison and carcinogen. A petition had been filed with the FDA to remove arsenic from animal feed and the FDA had until June 15th to respond.  ANH-USA forwarded the thousands of comments our readers submitted in support of the arsenic ban to the FDA. Thank you all for taking action!

Arsenic-containing compounds are most widely used in chicken production, and most chickens receive arsenic–“fortified” feed. Most arsenic-containing animal feed additives are not used to treat sickness. Instead, these additives are commonly used in poultry production to induce faster weight gain and give the meat a healthy-looking color; the same techniques are used to a lesser extent in turkeys and hogs.
Last December, the Center for Food Safety and the Institute for Agriculture and Trade Policy filed a petition with the Food and Drug Administration calling for the immediate withdrawal of approvals for arsenic-containing compounds used in animal feed. The petition was supported by a coalition of food and farm groups around the country.
Arsenic is powerful carcinogen. The government knows this; they state openly that “the International Agency for Research on Cancer (IARC) has determined that inorganic arsenic is carcinogenic to humans.” And it is now well known that these feed additives lead to arsenic residue both in conventionally raised chickens—that is, chickens sold in supermarkets and restaurants across the country—and in the environment, putting our health at risk.

Just two weeks ago in The Pulse of Natural Health, we discussed the safety of nutritional supplements, and how trace amounts of arsenic and lead get into herbal supplements because the metals occur naturally in air, water, soil, and food. How much more ironic is it that arsenic, in far greater amounts, is being added to our food, with no public outcry, no mention in the conventional media (compared to the dramatic headlines over the trace metals in supplements)—and worst of all, no action whatsoever from the FDA, our supposed “watchdog” agency!
In fact, it would be shocking if the FDA did take any positive action—its pattern is to support big business and the pharmaceutical industry in particular no matter the cost to public health.
Case in point: In 2008, the FDA issued a rule that banned the widespread use of a class of powerful antibiotics—specifically, cephalosporin antimicrobial drugs—in food-producing animals. In July of last year, they even called the practice “a public health risk.” Then, last December, they reversed their decision, bowing to pressure from agriculture groups and pharmaceutical makers, who claimed that the antibiotics are needed to prevent many infectious diseases in animals.
“Needed”? On the contrary: public health officials and the American Medical Association are worried that excessive use of antibiotics—including in animals—can promote resistance and produce strains of bacteria that threaten human life. And even the FDA’s director of veterinary drugs, Steven Vaughn, told a conference that that antibiotic-resistant bacteria are becoming more common in cattle.
But back to arsenic. For many years, pressure-treated lumber was coated with a preservative that contained arsenic to keep it from rotting. It was used for foundations and decks and playground equipment, wherever wood is exposed to earth and weather. But the wood treatment industry and the Environmental Protection Agency finally reached the commonsense conclusion that the best way to protect kids from arsenic wood was not to affix a “Poison!” label to it, but to eliminate it altogether, and in 2004 the substance was banned. In many cases, kids’ playgrounds had to be replaced, and many public decking areas had to be rebuilt. So the government thinks it’s too dangerous for kids to play around arsenic-treated wood, but the FDA says it’s OK to put it in feed—that is, directly into our own food supply? How does that make any sense?
It is true that the EPA and the FDA often disagree. For example, the EPA says that five micrograms per liter of blood in a 132-pound woman is the maximum amount of mercury she can have in her system and still be considered healthy and nontoxic. The FDA has not issued any advisory on maximum mercury levels, and seems entirely unconcerned about the mercury that children (and adults, including pregnant women) get in their flu shot. Mercury, of course, is one of the most toxic-heavy metals and causes fainting spells, nausea, intermittent stomach upset, headaches, fatigue, abnormal hair loss, and trouble concentrating, among other damage.

514 responses to “Tell FDA to Ban Arsenic in Animal Feed!”