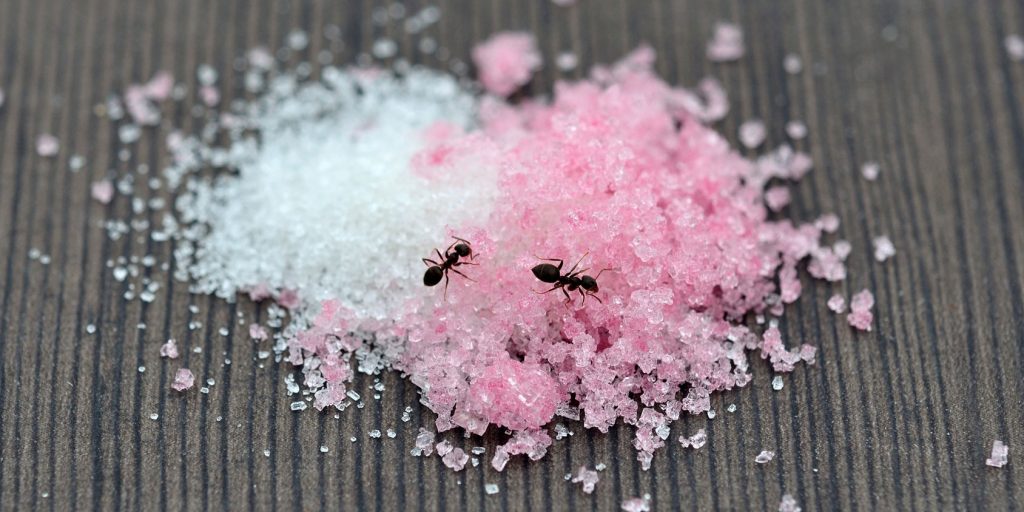 Chances are very good that you haven’t knowingly swallowed any aspartame (NutraSweet,® Equal,® Equal Spoonful,® Equal Measure®) for years or even decades. However, you may not yet be aware of a really good use for aspartame that originally published in the Idaho Observer in 2006.[1]
In that Observer article—titled as above!—Jan Jensen describes the disappearance of carpenter ants after packets of aspartame are emptied in areas they’ve invaded. Jensen also tried aspartame on “small black ants,”
but unlike the carpenter ants, these ants wouldn’t touch “plain” aspartame. However, when it was mixed with apple juice, these small black ants would take it home to their nests, and all would be dead within twenty-four hours.
Similarly, fire ants ignored aspartame until a light rain moistened it. Jensen writes that after the aspartame was moistened, “They [the fire ants] went crazy, hundreds of them grabbing it and taking it back into the mound. When I checked the mound 2 days later, there was no sign of the fire ants. I even dug the mound up some, and still saw none of them.”
The “usual suspects” defending big-money patent medicine interests online have criticized these direct observations, writing such things as, “No evidence supports that assertion.” They report experiments with unspecified quantities of aspartame given to ants from “Ant-Farm-brand live ant habitats,” which somehow are equated with living-in-the-wild carpenter ants and fire ants.
Since reading Ms. Jensen’s report, my observations have been that wild carpenter ants can be made to disappear every time by spreading the contents of two or three packets of NutraSweet® near their ant trails. Just as she observed, smaller black ants (again, not the tame ones from the Ant Farm) don’t like “plain” NutraSweet, ® but mixing it with apple juice and spreading it about makes them disappear too.
I am actually happy to report no experience with fire ants (not being “privileged” with them in our area), but other non-carpenter, non-small-black ants (not being an ant-ologist, I don’t know exactly what their names are, or more accurately, what they were) have also been persuaded to never return with either dry, moist, or mixed-with-juice NutraSweet. ®
Obviously these observations aren’t final proof. However, I thought you might like to know—just in case ants of any sort invade your home—that there really is a good use for aspartame!