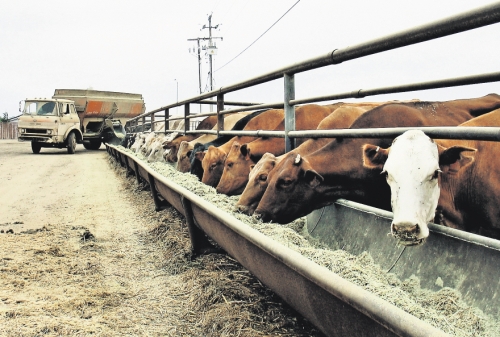 Just as everyone was making last-minute holiday preparations, the FDA quietly announced they would no longer try to restrict the routine use of antibiotics in animal feed. An Action Alert update!

The so-called “preventive” use of antibiotics in livestock is routine and widespread. Factory farms use them to ward off illness in animals that are kept in overcrowded, filthy living conditions that are a perfect environment for the spread of illness. These antibiotics also promote increased growth in animals.
In fact, 80% of all antibiotics sold in US go into farm animal feed. Germs resistant to one or more drugs kill 100,000 hospital patients every year in the US, which costs the healthcare system more than $34 billion.
In the last eighteen months, the World Health Organization issued a global alert on the dangers of antibiotic-resistant superbugs; antibiotic-resistant bacteria sickened people in three states; and a study found that up to half of US meat was contaminated with antibiotic-resistant staph. The agriculture industry stridently opposes legislative and regulatory attempts to curtail antibiotic usage, making the absurd claim that the science is still inconclusive.
For the past thirty-five years, the FDA has supposedly been trying to curtail the routine use of antibiotics. Odd that such a long-lived and concerted effort by such a powerful agency has failed so miserably, isn’t it? In 2008, the FDA issued an outright ban of the cephalosporin for livestock. But the agency withdrew the plan after strong opposition from industry groups that wanted to preserve some uses of the antibiotic.
On December 22 (probably hoping no one would notice in the holiday craziness), the FDA quietly withdrew its three-decade-old request to remove antibiotics from animal feed. “FDA believes that by implementing [a voluntary compliance] strategy, it will achieve its goal of promoting the judicious use of antimicrobial drugs in a more timely and resource-efficient manner than could be accomplished otherwise,” the agency said in its announcement. “FDA’s experience with contested, formal withdrawal proceedings is that the process can consume extensive periods of time and significant amounts of Agency resources” [emphasis ours].
In plain English, FDA is saying that industry opposition makes pursuing a ban too expensive. Big Ag is opposing something that probably every single American, if you stopped them on the street and asked them, would be in favor of—and the FDA is listening to industry rather than the hundreds of millions of Americans who want food that isn’t laden with hazardous antibiotics.
Happily, people did notice that FDA had bowed down to Big Farma, and immediately made a ruckus. So last week, to appease public outrage, FDA imposed new (but extremely slight) limitations on antibiotics that will barely make a dent in the real problem.
The new rule limits some uses of cephalosporin in some animals, banning routine injections into chicken eggs, and large or lengthy dosing in cattle and swine. This rule is much less strict than the ban proposed in 2008, since it still allows veterinarians to use “off-label” antibiotics, and it doesn’t address small-scale-production animals like ducks and rabbits. Nor does it cover the use of penicillin and tetracycline in feed and water when used for promoting the growth of animals or preventing illness that results from unsanitary living conditions—a practice that accounts for the majority of antibiotic use in agriculture. Why are they used so widely? Because unlike cephalosporin, these antibiotics do not require a veterinary prescription.
When asked about the lack of a guideline for the use of penicillin, FDA Deputy Commissioner Michael R. Taylor—who just happens to be a former Monsanto executive!—said, “We’re hopeful that in the coming months, we’ll be able to carry forward on that work.” In other words, “That’s not on our current agenda.”
The FDA drastically (and perhaps purposefully) underestimated the number of NDI submissions that will be required under their proposed draft guidance for dietary supplements. If they don’t have the manpower, funding, or scientific clout to do something as simple as standing up to industry pressure on antibiotics in animal feed, how are they going to evaluate thousands of NDI submissions? Talk about skewed priorities! They can’t (or won’t) stop this dangerous practice, but they’re happy to waste their limited resources—and our tax dollars—attacking supplements
We say it all the time, but it bears continued repeating: Supplements aren’t killing people. Drug-resistant bacteria are.
HR 965, the Preservation of Antibiotics for Medical Treatment Act, now has 74 co-sponsors, but the bill has been stalled in the Health subcommittee since March of last year. Please write to your representative and senators today about FDA’s inability or unwillingness to take substantive action, and ask them to take action on this important bill right away! Please take action today!

12 responses to “Big Farma Convinces FDA to Take a Dive”