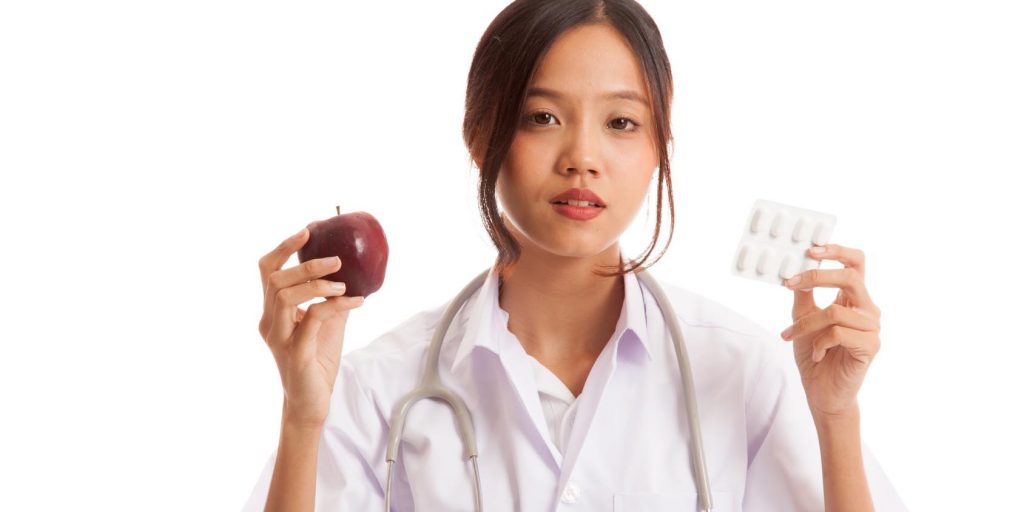 What’s this? Proverbs, apples, and statins? What’s a mixed bag like this doing in the Green Medicine Newsletter? By the end of this short article it’ll be relatively clear; the phrase “comparative proverb assessment” was in the title of a scientific article about apples and statins in the British Medical Journal.[1]
Despite the title, the article made a sound scientific point. The researchers decided to test (as they put it) “almost 150 years of Victorian wisdom”—how the proverb “an apple a day keeps the doctor away” compares with the more widespread use of statins in prevention of cardiovascular disease. They compared the potential effect of prescribing either an apple a day or a statin every day to everyone in the United Kingdom over 50 years of age. They also “estimated the number of (potential) adverse events, and compared the subsequent drug, or fruit, costs.”
For the scientifically and technically inclined, the researchers then go into a long technical explanation of the methods used in arriving at their conclusions, which can be found in the full article cited below; we’ll skip this part and go to the discussion of their conclusions, which are definitely much more fun. From this discussion:
Prescribing either an apple a day or a statin a day to everyone over 50 years old is likely to have a similar effect on population vascular mortality. Choosing apples rather than statins may avoid more than a thousand excess cases of myopathy [harmful effects on muscle] and more than 12,000 excess diabetes diagnoses. The basic costs of apples are likely to be greater than those of statins;[2] however National Health Service [NHS] prescription prices and convenience may drive people to purchase their apples from a store rather than through a pharmacy, thereby reducing direct NHS costs, or the NHS may be able to negotiate apple price freezes, although defrosted apples may not be so palatable.
Small digression: You might think, “Wait! How can the price of apples be more than the price of patent medicines?” Remember, this is from the UK, where the National Health Service [NHS] “provides” the patent medicines, so NHS drives hard bargains with the patent medicine companies to keep prices down. Here in the US, Medicare Part D is prohibited by law from negotiating with patent medicine companies for lower patent medicine prices.[3] So in these United States an apple a day would be considerably cheaper than statins. But back to the main topic. . . .
The researchers concluded:
Our study suggests that both nutritional and pharmaceutical population approaches to primary prevention of vascular disease have potential to have a significant effect on population mortality. We find that a 150 year old proverb is able to match modern medicine and is likely to have fewer side effects.
An apple a day keeps the doctor away as well as statins! And zero adverse effects; no myopathy, no type 2 diabetes. Apples, anyone?
[1] Briggs A, Mizdrak A, Scarborough P. “A statin a day keeps the doctor away: comparative proverb assessment modelling study.” BMJ 2013;347;f7267
[2] UK Department of Health. “Government agrees breakthrough drug pricing deal with pharmaceutical firms.” 2013. http://www.gov.uk/government/news/government-agrees-breakthrough-drug-pricing-deal-with-pharmaceutical-firms. Accessed August 1, 2016.
[3] http://Blog.cahealthadvocates.org/2014/05/why-cant-medicare-negotiate-lower-drug-prices-for-part-d/. Accessed August 1, 2016.