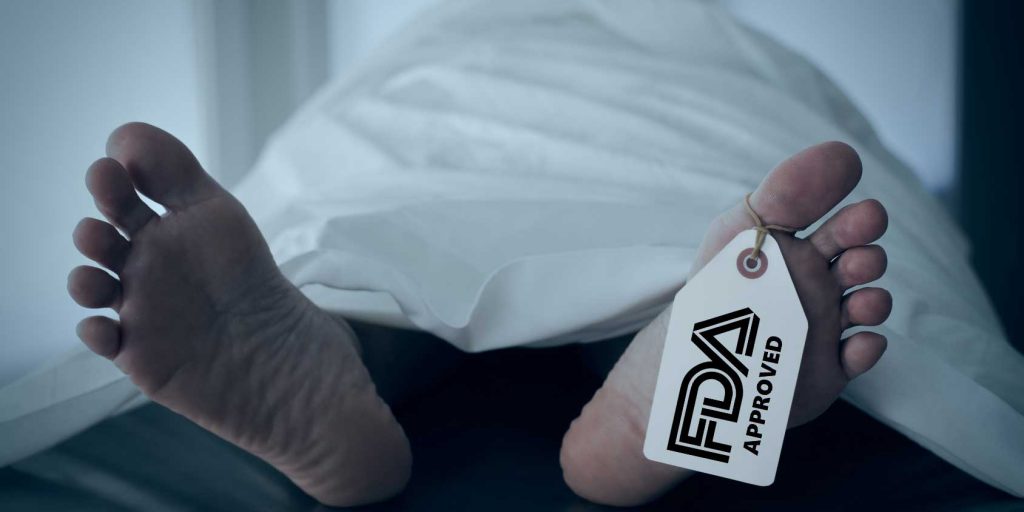 How many deaths is the FDA responsible for? Our new interactive tool can provide you with a good estimate. Action Alert!
The US Food and Drug Administration (FDA) is responsible for all of the following:

Over the years, the FDA has caused immense damage to the American public through its narrow-mindedness, scientific ineptitude, and bias against innovation and towards dangerous pharmaceutical drugs. Yet many Americans are unaware of the full extent of the harm caused by this agency that seems so deeply mired in corruption.
To this end, we are unveiling our new microsite, the FDA Death Meter. Drawing on data feeds from a variety of governmental sources, users are able to look at the actual numbers of serious adverse events like hospitalizations and deaths from FDA-approved drugs, vaccines, and medical devices. Because the government openly acknowledges that adverse events are grossly underreported, the FDA Death Meter allows users to apply different underreporting adjustments to the numbers. This will give the American public a more complete understanding of how extensively the FDA has been hijacked by the pharmaceutical and medical industries. The meter cannot, of course, capture how many lives could have been saved by allowing innovative therapies or natural treatments, but at least it can show actual harm done by FDA-approved treatments.
The FDA Death Meter website also contains a thorough analysis of the many problems that have led to this dismal state of affairs, including:

At ANH-USA, we’ve worked to expose the corruption of the FDA and fight back against its vendetta against natural medicine. A theme running through much of our work has been the dire need to reform the FDA: to take the agency apart, redefine it, and recreate it so that it supports, not obstructs, the mission of advancing public health and medical science. The FDA Death Meter site houses a petition that calls on Congress to reform this swollen agency that controls as much as a quarter of our economy.