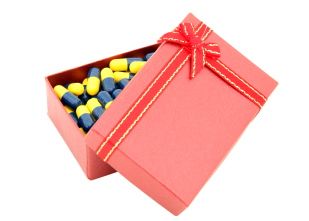 Want to let the drug industry take your favorite supplements off the market, patent them, and sell them back to you—by doctor’s prescription only—for 10 or 100 (or even more) times what you’re paying now? A follow-up to our recent Action Alert.


As Big Pharma becomes more desperate to boost flagging profits, the industry will likely use this tactic to find new sources of revenue—and shame on the FDA for so blatantly aiding and abetting it!

This coming year, seven of the world’s twenty bestselling drugs will lose their patent protection and can be sold in generic forms. On this list are the top two money-makers ever created: cholesterol fighting (but overall health-threatening) Lipitor and blood thinning (but bone-destroying) Plavix. This wave of expiring drugs patents will have unprecedented and devastating effects on the industry bottom line. One drug recently made available in generic form—Protonix, a medication for severe heartburn (again, not a drug we would use, and especially dangerous when used with the blood-thinner mentioned above)—previously cost about $170 per month when it was still under patent; its generic version now costs $16. With seven of the top-selling drugs expected to see similarly drastic drops in prices, the drug industry is in a panic—especially considering the fact that there are no new “blockbuster” drugs in the pharmaceutical industry pipeline. Under these circumstances, why not try to turn some supplements into drugs?

Even before the draft FDA’s NDI (new supplement) guidelines, supplement manufacturers already faced a “race-to-the-market” threat from the drug companies. The Dietary Supplement Health & Education Act of 1994 (DSHEA) states that a company cannot market a New Dietary Ingredient—that is, a new supplement—if an IND (Investigational New Drug) application for that ingredient has already been filed and research on that ingredient is publically available (a study published in any scientific journal will do).

If the ingredient was already used in a supplement legally marketed before the IND (drug) application was filed, then the supplement company can continue to market it even after the drug filing. But what does “legally marketed” mean to the FDA? It can mean that the supplement was sold in quantity before 1994. Or it can mean that the supplement’s NDI (new supplement) filing has been accepted by the FDA. The problem is that the FDA rejects most NDI (new supplement) filings. And it takes a long time to review even the few it accepts, giving drug companies plenty of time to get a competing drug application in. In complete disregard of the clear intent of the law governing supplements, the FDA has stacked the deck against any new supplement and in favor of any new drug.

Bottom line: If a drug company files an IND (drug) application for a natural substance before a supplement manufacturer can meet the onerous NDI (supplement) notification standards and receive FDA approval, the supplement company can never again sell the substance in its natural form.

This is precisely what happened to pyridoxamine, one of only three natural and bioavailable forms of vitamin B6. And it could also happen to P5P— the ultimate form of natural B6 which all other forms of B6 must convert to before being used by our body. Without P5P we would all die, yet the FDA may turn it into a prescription drug. Please see our Action Alert on P5P.

According to the FDA’s draft guidance, there are 55,600 dietary supplements on the market but only about 700 NDI applications (new supplement applications) have been sent, and the FDA has rejected around 64% of them. Not all of the 55,600 supplements are new (NDIs), but since an NDI is defined as any substance created, modified from its original form, or newly marketed any time in the past seventeen years, we can assume that many of them are! Depending on how the term new supplement is defined in practice by the FDA, there are many thousands of natural substances that can easily be turned into prescription drugs.

At the present time, it is not even possible to know how many IND (drug) applications for natural ingredients have already been filed by drug companies. All this information is kept under wraps by the FDA and not made publicly available.

ANH-USA has read several of the FDA rejected NDI notifications (applications) for very commonly used and essential natural substances—ingredients which are now being investigated as drugs. We don’t want to name them for fear that it would put a target on their back, but the problem is very real.

Any “new” supplement is already at risk of being converted into a drug—and this risk is greatly increased by the new FDA NDI (new supplement) guidelines. But the new FDA guidelines don’t stop there. While they encourage drug companies to take natural substances, they forbid supplement companies from selling synthetic botanicals.

What does this mean? “Botanicals” refers to plants. For years drug companies have studied plants for medicinal uses. If they find a useful plant, the next step is to try to create a synthetic analog of the natural plant substance, a new molecule that can be patented and then taken through the FDA as a new drug.

Nothing unfamiliar about this. What is new in the draft FDA NDI (new supplement) guidelines is that synthetic versions of botanicals may never be sold as supplements, only as drugs. In effect, the FDA is giving drug companies a monopoly on synthetics, knowing full well that, in general, only synthetics can be patented, and only patented substances can be brought through the hugely expensive FDA approval process.

This is all blatant crony capitalism—a huge gift to the drug industry without any conceivable benefit to the public. There can be no reason for it other than to pad Big Pharma’s pockets—a guaranteed monopoly on synthetic botanicals for drug companies to patent, all of which will lead to larger drug company fees being paid to the FDA.

In saying that drug companies should not have a monopoly on synthetic products, we are not endorsing synthetic products per se. At ANH, we prefer natural products. For one thing, they are generally safer. Why? Because synthetics are new to our bodies; we have not evolved with them. The risk of unintended or unknown side effects is greater. One of the oldest drugs in the world, aspirin, is a synthetic derivative of white willow bark. The herbal form is less likely to cause internal bleeding.

Cholesterol-lowering drugs like Lipitor, Zocor, and Pravachol are synthetics based on the natural ingredient ivostatin found in red yeast rice. The FDA has repeatedly gone after companies that sell red yeast rice products containing ivostatin, on the grounds that this entirely natural substance has now become “an approved drug product” which can only be sold as a drug. Lipitor is the currently the best-selling drug ever made, with 2010 global profits at about $11.7 billion. It is also, unlike red yeast rice, an unrecognized but major health risk for millions of users, as we have pointed out in earlier articles.

Lovaza (omega-3-acid ethyl esters), is the only FDA-approved semi-synthetic omega-3 fish oil, though a second drug, Epanova, is in Phase III of its drug trials. To keep the FDA approval cost down, it is supposedly only approved for the treatment of very high triglycerides. But doctors prescribe it for many reasons, and it is the only fish oil that Medicare and Medicaid and the Veterans Administration is allowed to reimburse. This is wonderfully profitable monopoly for the drug company producing it. Lovaza costs $6.75 per day, over $200 per month. A high-potency natural fish oil supplement with the same EPA and DHA amounts may cost less than 50¢ per day, or $15 per month.

Given a choice between natural and synthetic, we vote for natural. But that doesn’t mean that drug companies should have a monopoly on synthetics. If the FDA has its way, everything we take apart from food would be synthetic, patentable, sold by a drug company, prescribed by a doctor, cost a fortune, and produce a mountain of fees for the FDA itself.

If you have not done so already, please send your message to Congress through our Action Alert on the FDA’s NDI guidance. While you’re at it, be sure to see our Action Alert on the closely related and equally dangerous Durbin bill and let your voice be heard! We cannot emphasize strongly enough how very important it is that we fight on these two issues—your access to natural supplements is at stake!

47 responses to “NDI Draft Guidance is a Big, Fat Gift to Big Pharma”