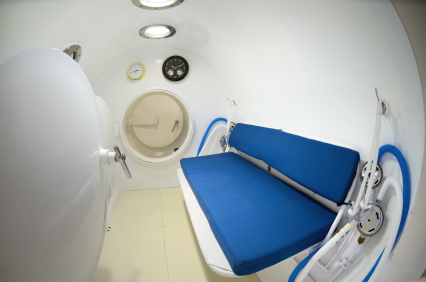 The agency has just issued a warning to consumers. As is so often the case, what they don’t tell you is more important than what they do tell you.
The agency’s warning begins, “No, hyperbaric oxygen therapy (HBOT) has not been clinically proven to cure or be effective in the treatment of cancer, autism, or diabetes. But do a quick search on the Internet, and you’ll see all kinds of claims for these and other diseases for which the device has not been cleared or approved by FDA.”
HBOT is approved to treat thirteen conditions: decompression sickness, thermal burns, non-healing wounds, necrotizing soft tissue infections (a.k.a. flesh-eating bacterial disease), acute traumatic ischemias (e.g., crush injury, compartment syndrome), radiation tissue damage, smoke inhalation and carbon monoxide poisoning, air or gas embolism, severe blood loss anemia, refractory osteomyelitis, compromised skin grafts, and clostridial myonecrosis (gangrene).
There are, however, many other conditions that HBOT appears to treat effectively, based on solid or promising research. Licensed physicians and healthcare institutions may legally use an FDA-cleared hyperbaric chamber to treat unapproved or “off-label” diseases and conditions, though it is illegal to promote or advertise such uses. A few doctors are already using HBOT off-label, but not nearly enough of them. Here are some of the off-label applications:

This isn’t even true. The DoD often uses antipsychotic drugs off-label to treat TBI and PTSD. About 20% of veterans diagnosed with PTSD—or nearly 87,000 patients—are prescribed an antipsychotic each year even though it is an off-label use.

In total, including prescriptions outside the military, nearly 280,000 individuals received antipsychotic medications in 2007. Yet over 60% of them had no record of a diagnosis for which these drugs are approved. Antipsychotic drugs were prescribed off-label for PTSD (42% of the patients), minor depression (40%), major depression (23%), and anxiety disorder (20%)—with about 20% having more than one condition.

Oxygen is necessary for healing. HBOT saturates tissues with ten to thirteen times as much oxygen as can normally be breathed in. Hyperbaric chambers and hyperbaric oxygen therapy have been used clinically since the mid-1800s. HBOT was tested and further developed by the US military after World War I. Today, nearly every hospital owns a hyperbaric oxygen chamber. Most of these sit empty and unused.
With so many conditions that HBOT can treat effectively, why in the world should we keep people sick or in pain when we have the means to ease and even reverse their condition? And why is FDA issuing warnings to consumers to keep them from pursuing such a vital therapy?
The FDA’s consumer warning continues that HBOT is not “the kind of universal treatment it has been touted to be on some Internet sites. FDA is concerned that some claims made by treatment centers using HBOT may give consumers a wrong impression that could ultimately endanger their health.”
The warning continues, “Patients may incorrectly believe that these devices have been proven safe and effective for uses not cleared by FDA, which may cause them to delay or forgo proven medical therapies.” “Proven medical therapies” like dangerous drugs and expensive, invasive surgery, perhaps?
This is part of the problem. The FDA tends to protect therapies that are non-natural and patentable, so that drug companies can afford to spend $1 billion on average for agency approval. Bringing these drugs through the approval process pays the agency’s bills, including salaries. Indeed much of the cost of the FDA is born directly by drug companies, which creates a huge conflict of interest.
The other piece of information left out of the FDA’s warning is that patents on HBOT tanks ran out long ago, so that bringing the therapy back for additional use approvals is very difficult if not impossible. The FDA is thus telling you not to use it for unapproved uses, but failing to disclose that other uses will likely never be approved, that pleas for government funding of HBOT research will go nowhere, and that the agency itself won’t lift a finger to do something about this situation, no matter how much human suffering this policy creates.