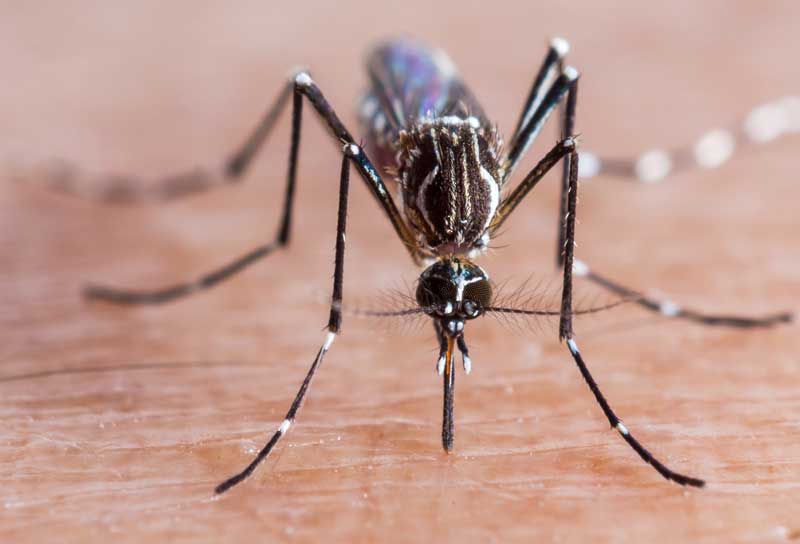 Genetically engineered mosquitoes may be released in the Florida Keys in the next month or two. Will they make infectious diseases spread even more quickly? Action Alerts!

As we reported previously, Oxitec, a British biotech company, plans to release an experimental mosquito population genetically engineered to combat dengue fever. This is especially unnecessary since there have been no cases of dengue fever reported in the Florida Keys since 2010. The company has been preparing for FDA approval to use Key West as a test population, which is expected to happen within the first two months of 2015.
They aren’t testing in Florida to see whether they can reduce dengue fever in the populations there currently, but rather to see whether they can eradicate the particular breed of mosquito that carries dengue fever. They would do this by releasing GM mosquitoes to breed with the population that carries dengue fever, resulting in offspring that can no longer have offspring.
Of particular concern is the fact that a recent study showed that the same GM mosquitoes released in Brazil did not, in fact, lead to a drop in dengue fever. The number of mosquito eggs fell by an impressive 92% in the city of Jacobina in eastern Brazil—but it did not lead to a drop in the incidence of dengue itself. In fact, there are concerns in Brazil that GM mosquitoes could make dengue outbreaks worse, since a second more invasive species could move into the ecological niche left by lowered populations of the target species.
In Florida, local citizens are concerned that there hasn’t been enough testing or discussion about the environmental impact. The public and a coalition of organizations have made it clear in town hall meetings and through a letter to Gov. Rick Scott that the release should be stopped. Their concerns:

Food & Water Watch’s executive director, Wenonah Hunter, put it this way: “The proposed open-air release of millions of unregulated, experimental insects into the Florida Keys opens a Pandora’s box that cannot easily be sealed.”
The mosquito release was originally planned for Key West. However, the Key West City Commission passed a law opposing the introduction of genetically altered mosquitoes until further research is provided, and operational standards and a plan to demonstrate measurable outcomes are described to the public.
Undaunted, Oxitec has now moved its operation to Key Haven. There are grassroots attempts to pass a similar ban in Key Haven, but there is no guarantee that Oxitec won’t move its operation again. Mike Doyle, director of the Florida Keys Mosquito Control District, promised that there would be more transparency, testing, and standards for the mosquitoes.
At this stage approval seems inevitable unless a strong message is sent to the FDA not to approve the GM mosquitos. Similar to the GM salmon (which also seems close to approval), we fear that approval of GM mosquitos will set a bad precedent and open the floodgates to all the other GM animals waiting in the pipeline.
You may recall our report on the nationally respected statistician and risk analyst who warned that GMOs are so dangerous that they could destroy all life on the planet. He argues that calling the GMO approach “scientific” betrays “a very poor—indeed warped—understanding of probabilistic payoffs and risk management.”
Natural health prevention and treatment of viruses are not being utilized; there are specific natural protocols to treat dengue fever. Colloidal silver has been used as a treatment for dengue fever and other similar viruses. Intravenous vitamin C drips have shown to be effective for other major viral outbreaks (such as ebola).
For more on mosquito-borne illnesses, see our article on the chikungaya virus in this issue.
Action Alert! Tell the FDA not to approve GM mosquitos. Explain the extraordinary risk to the environment and to human health, the lack of effectiveness when the same approach was tried in Brazil, and the tremendous pushback from the citizens of Florida, and ask them to reject these “Frankenmosquitoes” completely. Send your message today!

Second Action Alert for Florida Residents Only! Contact Gov. Rick Scott, as well as your state senator and representative, and ask them to block the release of these dangerous mosquitoes. Send your message today!

2 responses to “Frankenmosquitoes Are Headed to Florida!”