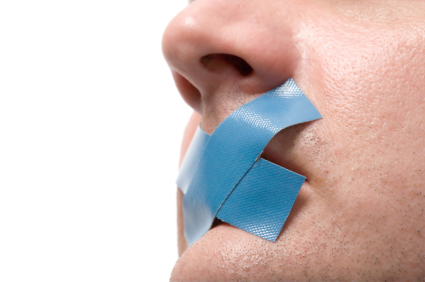 State licensing boards are trying to prevent unlicensed citizens from even talking about certain subjects. Here are some of the latest gag orders.

In May, newspaper advice columnist John Rosemond received a cease-and-desist letter from the Kentucky attorney general’s office on behalf of the state’s Board of Examiners of Psychology because Rosemond dispensed advice to his readers without having a Kentucky psychology license. Rosemond is a licensed family psychologist in North Carolina, has written numerous books, and is syndicated in over 200 newspapers! The letter also stated that because Rosemond is only licensed to practice psychology in North Carolina, he may not call himself a “family psychologist” in the tagline of his newspaper column.

The public was understandably outraged, prompting the board to do some serious backpedaling, speciously claiming that it did not attempt to censor Rosemond’s advice column. He has now filed suit in federal court to defend his First Amendment rights.

Regular readers will recall our story on Steve Cooksey, a blogger in North Carolina. The state’s Board of Dietetics/Nutrition wanted to prevent him from offering free nutrition advice based on personal experience—even to his friends over the phone. Cooksey also sued. Just recently, in a significant win for free speech, the 4th US Circuit Court of Appeals held that Cooksey has legal standing in the case and the lawsuit can go forward. This is a big win.

The North Carolina board has attempted to chill free speech numerous times, having been involved in the investigation and surveillance of nearly fifty people and organizations in the state over the past five years—athletic trainers, a nurse, a pharmacist, and even Duke University’s Integrative Medicine department. All have been accused of the same “crime”: practicing nutrition without a license.

Now the Cooksey case goes back to federal court in North Carolina, where the merits of the case will be decided—whether the dietetics practice law is constitutional or not. Certainly the 4th Circuit Court seems to be on Cooksey’s side.

It’s not just Southern states having this problem. Remember that it was the state of Washington’s Medical Quality Assurance Commission (MQAC) that recently ordered integrative physician Jonathan Wright, MD, to draft a paper on the importance of licensure, even though MQAC was itself responsible for the alleged employee licensing violation that led to the order, because it knowingly posted misleading and deceptive information on its website. Forcing Dr. Wright to write an essay telling MQAC what it wants to hear is a profound violation of his right to free speech, as will no doubt be argued in his appeal to the courts.

As state-sanctioned licensing boards continue to proliferate, the trend of limiting free speech is increasing—almost without exception as a tool for the board to protect the professional turf of licensed practitioners. In the 1950s, only one in twenty US workers needed government permission—for that is what licensure is—to pursue their chosen occupation. Today, it is closer to one in three. Yet there is little evidence that licensing protects public health and safety or improves products and services. It does, however, increase consumer costs and reduce opportunities for workers. Utah’s cosmetology licensing board recently prevented a hairdresser from doing hair extensions without a license. Does anyone really believe that’s a public safety issue?

Licensing boards create strict scope-of-practice regulations so that only licensed people can practice—which automatically creates a monopoly on the field. State dietetic boards in particular are following this strategy in their attempt to monopolize the practice of medical nutrition therapy. Happily, we’ve recently seen numerous victories in state legislatures where new dietetics board bills had been introduced—twelve such bills were defeated in 2012!

Mainstream media is starting to pay attention to the issue, and the anti-competitive behavior of boards is even drawing the attention of the Federal Trade Commission. The FTC investigated the North Carolina dental board over its attempts to monopolize the teeth whitening business, and found it had illegally thwarted competition through cease-and-desist letters. The Alabama dental board is attacking its unlicensed teeth whitening competitors, but the FTC may not be able to intervene there because state law defines “dental service” very broadly.

The FTC is also scrutinizing state laws and practices that foster anticompetitive behavior by physicians, such as the scope-of-practice restrictions supported by physicians who trying to monopolize their field. In Tennessee, for example, until recently, only physicians were allowed to provide interventional pain management services. The state legislature wrote a bill eliminating that restriction—and FTC weighed in with its support, to the consternation of conventional doctors in the state. Happily, the bill passed.

The battle continues. “Those who expect to reap the blessings of freedom must…undergo the fatigue of supporting it,” Thomas Paine famously wrote. We must stay vigilant and assert our constitutional rights whenever they are in danger of being taken away from us.

18 responses to “No Free Speech Without a License!”