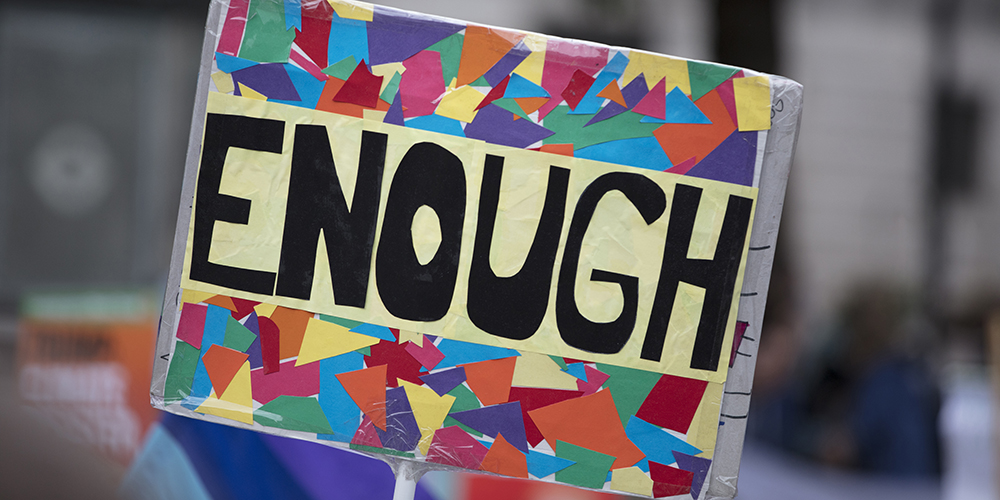 Introducing the ENOUGH movement, using a single word sentiment as a mechanism for profound change in our world.

The last 18 months have been a trying experience, and if you’ve felt that you’ve “had ENOUGH,” you’re not alone. This week, a new global movement has launched: the Enough Movement. Sparked by the non-profit Millions Against Medical Mandates, the idea is that we can create solidarity, collaboration, and profound change through the recognition of a common sentiment: we’ve had “ENOUGH,” and together we are “ENOUGH.”

Here are a few of the things we at ANH have had “ENOUGH” of:

Cronyism Undermining Natural Healthcare. We at ANH believe that all Americans have the right to choose natural, regenerative healing options. But special interests like Big Pharma and their cronies at the FDA work to create an unlevel playing field where natural therapies like supplements are eliminated, barred from competition, or excluded from mainstream medicine. Until we say “ENOUGH,” medicine will continue to be needlessly expensive and often ineffective.

The Chronic Disease Epidemic. The US is one of the least healthy nations in the world. We recently covered a study in which the authors show that factors such as lifestyle, lack of exercise, heavy pharmaceutical drug use, and environmental exposure to toxins lead to the development of chronic disease that has made the COVID-19 pandemic exponentially worse. Special interests are culpable for these trends that are making us so sick, but they are rarely held accountable: It’s the chemical companies pumping out endocrine disruptors, PFAS chemicals, and pesticides; it’s Big Food creating the processed, sugar-laden junk; it’s Big Pharma peddling ever more dangerous, often ineffective prescription drugs. We’ve had “ENOUGH” of special interests getting away with poisoning us while making billions and a health system that treats sick people rather than creating health.

Mandates. For decades, ANH-USA has been fighting state-level efforts to mandate vaccines and remove exemptions to vaccination. We are not anti-vaccine; we simply believe that individuals should have the right to decide the medical procedures they receive free of government coercion. We’ve had “ENOUGH” of these kinds of assaults on individual choice.

Censorship. We have certainly had “ENOUGH” of the unprecedented wave of censorship in recent years. Major search engines like Google no longer rank sites by popularity but use “quality raters” to manually lower the ranking of undesirable content. Trusted natural health sites like Mercola.com have seen their web traffic plummet from this sneaky censorship. The government has also gotten in on the action. The FTC and the FDA sent warning letters to hundreds of doctors and clinics for daring to mention the benefits of “unapproved” natural medicines like vitamin D, zinc, and vitamin C to address COVID-19 infection. Supplements are prevented by government rules from making basic health claims that are supported by the science because they aren’t, and largely cannot be, FDA-approved. Congress has pending legislation to restrict “health misinformation,” a term which would likely encompass anything outside of FDA or CDC recommendations. The Federation of State Medical Boards and the American Board of Emergency Medicine have threatened doctors with the loss of their license for straying too far from mainstream medicine’s orthodoxy. The list goes on and on. Information is power, and we can’t let those looking to restrict the free flow of information get away with it.

What have you had “ENOUGH” of? Join the movement! Use the #enoughmovement and #enough hashtags. Bold the word enough when you use it. Place a thin yellow line on your social media photos. Get with the #enough program.

16 responses to “ANH Has Had #ENOUGH”